The narrow lane that rises up out of the secret valley beyond our little stone cottage is bordered on one side by Cotswold dry stone walls and, on the other, by remnants of an ancient hedgerow. One of the ways of identifying those that date from the original wildwood is by the number of plant species found in them for 'modern' hedgerows (those that have been planted after 1600) contain far fewer varieties. One of the plants that dominate the lane is known as Old Man's Beard. In the photo below, it is difficult to tell what is snow and what is the, somewhat bedraggled, fluffy white seedhead that gives this wild clematis it's common name. 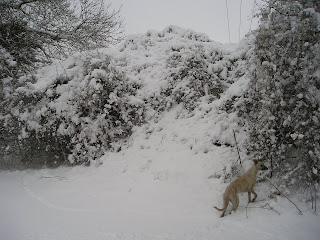 Now the snow has gone and the seed heads, not quite as pristine as before, have recovered but still live up to their name. They swamp the lower, trimmed parts of the hedge and it is hard to imagine how the field maples, hawthorn, sloes and other woody plants cope and survive. 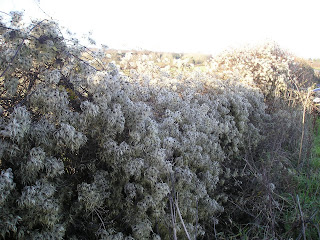 Three days ago, the birds began singing once more and claiming their territories so Spring can't be too far off (I'm being optimistic here as the sun has been shining too). The Old Man's Beard will, like garden clematis, be amongst the first to send out new shoots and leaves, in the process knocking off the old seedheads. For a short while the hedge has the opportunity to flourish before the clematis flowers appear. Although blooming in their thousands, individually they are quite insignificant and it is the scent that is the more noticeable - not the perfumed scents of roses and honeysuckles but honeyish, delicate yet cloying too, somehow. And the bees, especially the bumblebees can't get enough of their nectar. 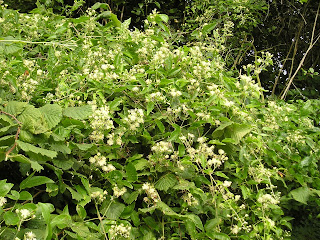 As a young child, I once stayed at a schoolfriend's grandparents and in their garden was an old chalk quarry, long disused. I would love to revisit it now but have no idea where it was - for years I believed that the village was called Loose Chippings. It was only once I grew up that I realised that this was the sign that council workers had put up after repairing the road outside their house! There must, I assume, have been trees in the pit - and it was certainly overgrown - for the Old Man's Beard had sent up its long vines high into the tree tops. Where this happens the stems become quite thick, strong and woody and we spent many happy hours there swinging through the trees Tarzan-like. They have also done this outside our cottage, where the hedgerow has grown into treelike proportions, although only once, (when I felt confident no-one would see me), have I swung on them. The exhilaration was the same and proves the thought that men never truly grow up but remain little boys that need to shave. 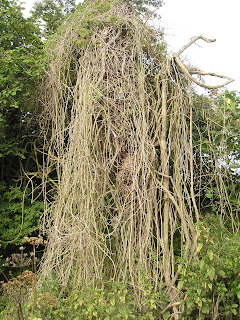 Virgin's Bower and Traveller's Joy are two of the other common names given to Clematis virginica. The first, one assumes, because of its tendencies to drape across other plants: how lovely it would be slumber gently beneath its shade on a warm day, breathing its scent and listening to the bees droning. According to my Herbal, in the past, wayfarers would make tea to soothe away headaches, wrap soaked cloths around their weary feet and treat blisters and saddle sores. No wonder it was called Traveller's Joy. I love to think that along our little lane, the old drover's would sit on the grassy roadside banks and rest, perhaps stopping for some ale at the old inn next door to us (and our only neighbour), their sheep and cattle drinking from the secret valley's meandering river. Did they also think, like me, this place to be so special? I doubt it, somehow. 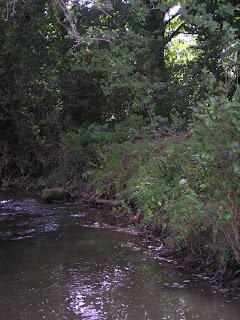