What a Difference a Day Makes....

.....Or a night, to be more accurate. We had been spared the snow that had covered most of the UK until now but it has finally arrived - and in force. We went to bed with none of the snow forecast but by dawn, it was another story. Over a foot of snow in just a few, dark hours is not the norm for this part of England, 1983 being the last time I can recall.
.
The first thing that greets my eyes upon waking is our beautiful silver birch tree - how different it looks today, with its branches crusted in snow, compared to the photo on my last post (here). No blue sky and gleaming bark, just that flat, leaden cloud, and the colour almost drained from the tree, that warns of worse weather to come.
. 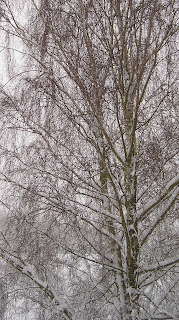 The view across the secret valley is also very different from the frosted look of Christmas Day (here). Clearing the car of snow - a task we don't normally do many times in a winter - is almost a novelty and we are thankful that we have a four wheel drive, for it takes us over an hour to drive to the horses, instead of the usual seven minutes but at least we got there. 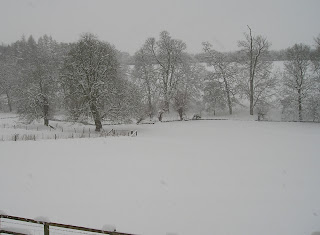 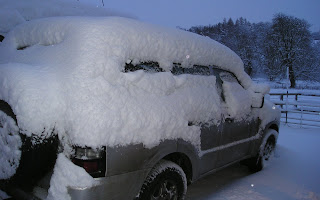 The UK has ground to a halt: airports closed, people trapped in their cars overnight, lorries jack-knifed, cars abandoned where they have slid and the councils running out of grit and salt. The latter doesn't make any difference to the secret valley for the gritters don't venture down here anyway. It is good to see the horses are safe, warm and well fed and enjoying the sensation of snow under their feet. And like us, they have beautiful views to look at from their barn during quiet moments. I wonder if they are aware how lucky they are! Or ourselves, for that matter - for in Scotland there is a report of a woman leaving home on Christmas Eve to collect the festive turkey and still unable to reach home, the road being blocked by snow. Apparantly, it is the first time in 36 years she and her husband have been apart. 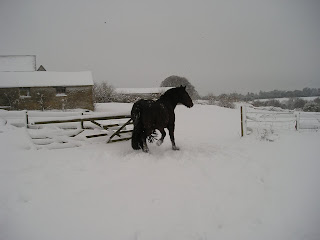 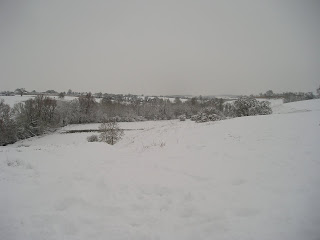 Down by the river, as the carol says, the snow is "crisp and deep and even". The water is high, almost to the top of the banks and, if we get a sudden thaw, will almost certainlly flood. However, the forecast is for another ten days of this cold spell with more snow at times - the weather is coming from Siberia so temperatures are likely to plummet further. And we do, in theory at least, still have the remnants of the weather systems from America to arrive yet which reach us about six weeks after they wreak havoc in the States. 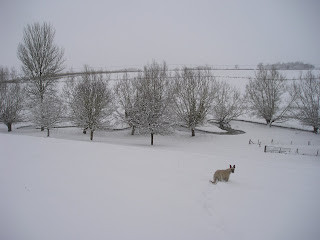 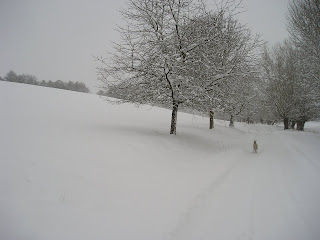