Of Holly , Ivy and Mistletoe

As it is the festive season it seems appropriate to look at the traditional greenery that we grow in our garden, or gather from the hedgerows, to decorate our homes at this time of year. And of all them it has to be the holly that offers so much as a garden plant. 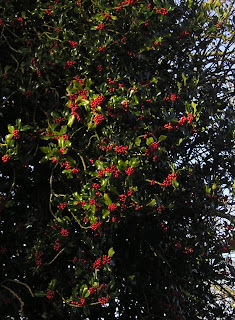 The holly is one of those species (relatively few in number) that have separate male and female plants. To have a crop of berries like the ones above it is necessary to have both sexes growing within pollination distance and, of course, it is only the female that will carry berries. In our garden we have a magnificent specimen of England's wild holly, Ilex aquifolium, but being male, is relatively boring (that isn't meant to be as sexist as it reads!). It towers above roof height and doesn't deserve the space it takes other than it provides us with shelter and a place to hang the bird feeders. How much better value it would be if it had been a variegated leaf sort. Fortunately there are lots of berried hollies growing wild in the secret valley for picking. 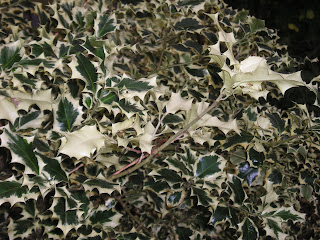 This holly is Argentea Marginata, a variegated form of our native holly and, being female, carries berries, making it very garden worthy. The occasional stem has pure white leaves. Ilex aquifolium grows naturally throughout the west and south of Europe, North Africa and west Asia. An oddity of holly common names is that many of the male plants have female names, and female plants male, so the variety Silver Queen, for example, is a non-berrying male. Very confusing! 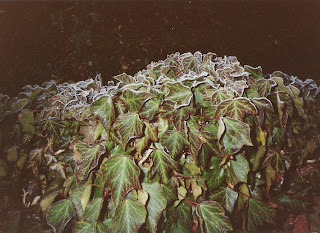 I'm not a great fan of Ivy. There are lots of different leaf shapes and colours but, generally, I think they are rather dull, although, I do admit, they can be useful in dark, dry corners where little else will grow. This wild ivy, Hedera helix, above, growing on a corner of our Cotswold dry stone wall (and it will bring the wall down if we leave it on there much longer), has been transformed, on a cold winter's morning, by frost which has given the upper leaves an icing sugar edging and highlighted the veins of the lower leaves. 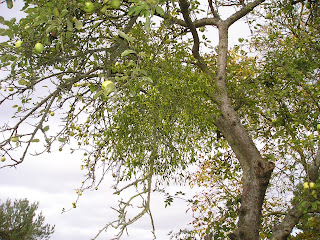 Mistletoe - the plant of lover's, or at least, of those trying to sneak a kiss from the unsuspecting. In England it grows wild, often on fruit trees in orchards or on poplars and always difficult to reach. Invisible for much of the year, once the tree's leaves have fallen in the Autumn, there it is hanging in great bunches high, high up. 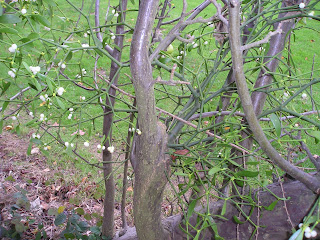 It is rare to find a plant growing as low as in the photo above and it gives a great opportunity to see how it attaches to the host plant. There are no visible roots: the stems of the mistletoe just grow from the trunk like young branches, easily identified by their dull green (as against brown) bark. Does mistletoe, Viscum album, ever kill the host tree? I have never seen this but I have seen quite sizeable boughs torn off a tree by the weight of the mistletoe bunches and, one assumes, the mistletoe must sap the strength of them. But then, mistletoe does carry green leaves so must produce a certain amount of its own food. Any idea, anyone?

For those not familiar with the tradition, it is custom to hang Mistleoe in the hallway at Christmas and to kiss those that stand beneath it.