There have been a number of blogs written about the blizzards and deep snow both here in England and also in America. Not only have there been photos of snowy landscapes but also photos of cars and buildings virtually buried under a deep, white mantle. 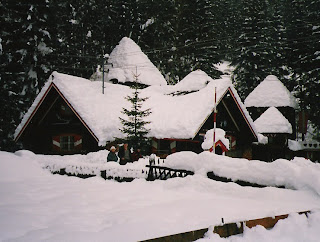 I've had to rely on a ski trip photo for really deep snow
Mariapfarr, Austria - the nearest I've seen to a real gingerbread house!

Even in the Arizona desert, where there is none, they manage to put up the most amazing Christmas tree made from white sprayed tumbleweed - quite magical, it's the best tree I've ever seen. Except I haven't seen it being stuck in the barely snowy Cotswolds. Virtual travellers like me can visit it via one of my favourite blog writers, Noelle (an apt name, of course and Happy Birthday, which I assume must be about now), Christmas in the Desert. 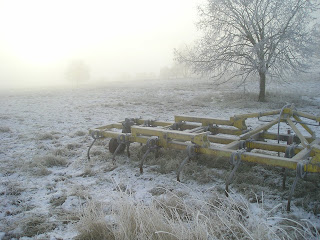 Our snowfall - just a dusting despite the warnings of up to eight inches forecast
Despite all the weather warnings, we have only had a dusting of snow, an apology for the real thing - it stopped about 15 miles away. We have had ice and lots of it, especially black ice to make us skid off our little country lanes. But the secret valley has looked magical with some wonderful skies and it has made us all feel much more Christmassy. And although we haven't had much snow, we have had everything else - sleet, freezing fog, freezing rain, bitter winds and a little sunshine. 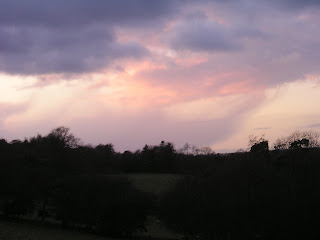 A winter's sunset and snow clouds over the secret valley
'
This morning was especially beautiful. The temperature overnight plunged exceptionally low to -8C or even lower, which for the south of England is cold: our winters tend to be a mix of cooler and warmer with average days rarely falling below -3C and rising to +6C. But as dawn broke, the fog came down and the sun tried hard (and eventually failed) to break through. 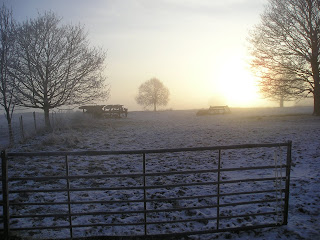 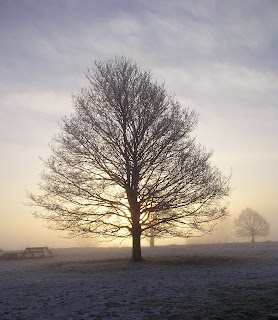 Fog, snow and a golden sunrise
'
When the weather is like it has been today, breaking ice on the horses water trough and refilling it with buckets from the house - for the hosepipes and outdoor water supply have frozen solid - isn't so much of a chore. And seeing the horses tucking into their haylage and knowing that they are warm and their bellies are full means that we can lounge in front of the wood burning stove without feeling too guilty. 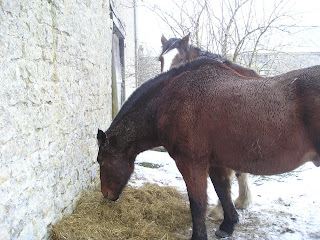 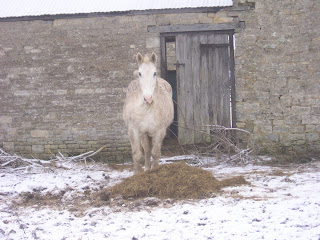 "Why does he keep taking all these photos?"

For Christmas Day the winds are turning to the southwest where the influence of the warm waters of the Gulf Stream will bring in mild, grey weather. The cold snap that is already passing brought winds from the east, travelling across the European mainland from Russia, these are always bitter spells. And, if all things happen normally in the New Year, we shall receive the remains of the snow that has fallen across the Eastern Seaboard of the USA, for we seem to get the tail end of their extreme weather about six weeks later. Perhaps there will be a snowy Cotswold blog then.