An Ancient Breed - The Exmoor Pony

Exmoor beckons at this time of year despite the harsh moorland climate. The landscape may be drab - the bracken and heather has lost most of its colour and the predominant colours are greys and fawns with just the occasional rusts and greens. However we were lucky - the sun shone for much of the time giving us additional blues from the sky and also from the sea, for the rolling moorland tumbles steeply into the sea on its northern edge. 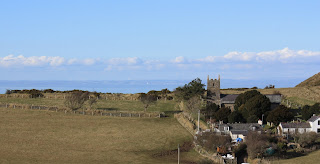 The origins of the Exmoor pony date back into pre-history, for they are the oldest surviving breed in Britain and have remained virtually unchanged from the earliest days. They are perfectly adapted to surviving on the moor all year and, as can be seen from the photographs, look fit and well having come through the snow and bitter weather of the coldest winter for very many years. The ponies that live in the Valley of the Rocks (photo below) are used to seeing people for it is a much visited area with easy access despite its rugged terrain. The ponies of the high moor are far more wary. 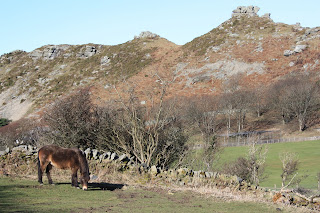 On a walk across Brendon Common there would appear to be no ponies or wildlife of any kind at all. However, ponies and red deer are common and buzzards and ravens soar and call overhead. Despite appearing to be a rolling plateau, the moor is divided by deep valleys, locally known as coombes. The little stream at its foot is Farley Water, a remote and a beautiful place. If you look carefully at the lower photo you will see the ponies - totally camouflaged. Their coats are the colours of the winter bracken, their mealy coloured muzzles (which is one of the breeds identifying features) the colour of the bleached winter grasses. 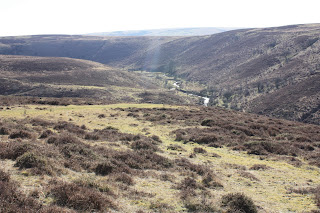 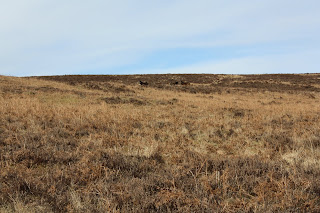 There are fewer than 500 Exmoors left and the breed is recognised as being endangered. Many of these are kept as pets and riding ponies in other parts of the country and there are probably no more than 150 of these free roaming ones left on the moor. It took quite a while to approach this group but patience was rewarded by finding the herd at rest with two lying flat out in the first sunshine of the year. 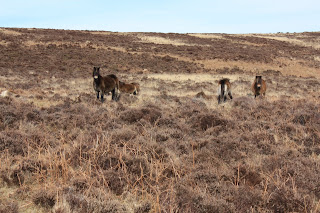 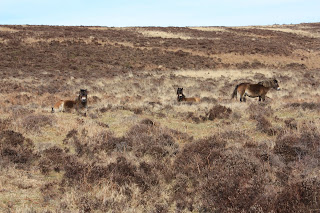 Getting too close for their comfort, they were soon up on their feet and ambling away. In a matter of moments their camouflage made the moorland look empty once again. 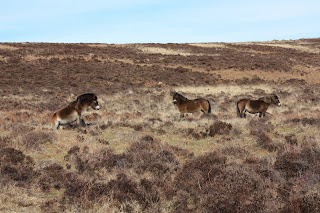 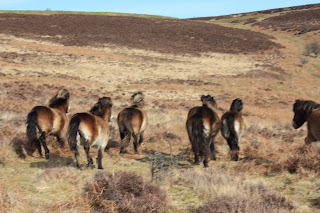 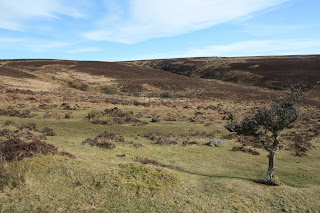