When I designed the summer border (featured in the last post) I made a conscious effort to experiment with plant combinations. Mostly, the results were pleasing - to my eyes , anyway - and sometimes surprising. The brief from my client was to keep the planting relatively low and to give the border a cottage feel rather than, say, the new 'prairie' style. They were not plantsmen or even keen to garden themselves: the only plant they really knew they wanted, and in quantity, were lavenders. This gave me my starting point.

The lavender hedge not only gave me plenty of lavenders, it also softened the curved and hard edge of the stone path that extended the whole length of the border. An unforeseen bonus was with the reflected heat from the stone - it seemed to heighten their scent, filling the air along with myriads of bees and butterflies that were attracted to it. Another good bee plant was Purple Loosetrife, Lythrum salicifolium, a native plant normally found in damp places and by pond edges. This is a garden cultivar 'Robert', which is shorter than the type and was quite at home in ordinary garden soil. The ground cover rose 'Magic Carpet' was a close match in colour, the result quite strident but tempered by the lighter centre of the rose flower. I wouldn't describe this as me at my most subtle! 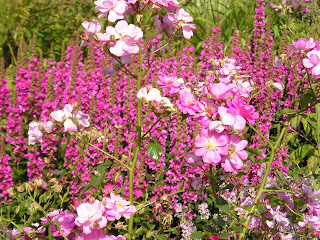 A much quieter planting and taking cottage style to it's extreme was this combination of Icelandic poppies and scabious. I didn't notice the bumblebee at the time but it really 'makes' the photo! 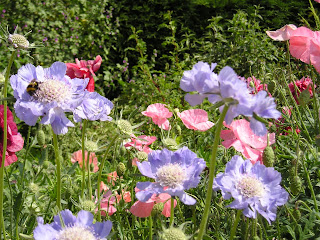 The Magic Carpet rose looks much easier on the eye planted against lavender and red sage. 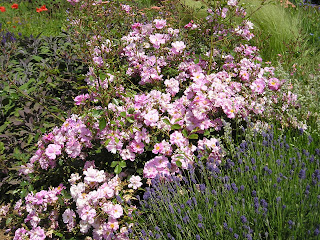 Climbing roses are a passion - no garden should be without at least one. This is a David Austin variety called Snow Goose and is one of my signature plants: it goes into many of the gardens I work with. It is easy, disease free, relatively low growing (about 9ft) so ideal for all sorts of odd corners. It sadly lacks scent which normally would rule it out for me. Certain plants such as roses, sweet peas and pinks, for example, have to have scent, for surely that is their 'raison d'etre'. Here Snow Goose is growing through Photinia davidiana 'Palette' which is being trained as a wall shrub. I love the way the tiny white flowers of the Photinia mimic the rose and the white splashes on the leaves are emphasised by the flower colour. 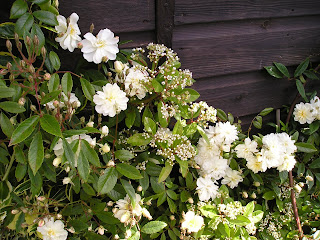 Rosa glauca is another rose that I use regularly. It is grown mostly for its wonderful foliage although the flowers are pretty, if somewhat fleeting. This shrub rose will grow to 6ft or more but to get the best foliage and stem colour it is best to prune it hard. Cut back severely it sends out these long, dusky wands which are perfect for cutting for use in the house. Here it is teamed with the Oriental poppy 'Patty's Plum'. The poppy was planted inside a trio of the roses which hides the poppy's leaves as these tend to become rather shabby. The thorns of the rose also hook the floppy stems of the poppy flowers which means that there is no need for staking and tying in: why bother with a chore like that when nature can do it for you? 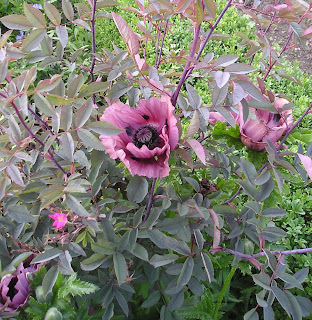 A combination of blues against a blue sky using Love-in-a-Mist (Nigella), Salvia nemerosa 'Rugen' and two Iris, 'Jane Phillips', pale blue with a pleasant scent and 'Deep Blue' with its dark, almost black flowers. The tall, ferny foliage in the background is the giant scabious, Cephalaria giganteum. Its pale yellow flowers give a complete colour variation to this part of the border as the iris fade and the Cephalaria opens to glow like moonshine behind the nigella and salvia.