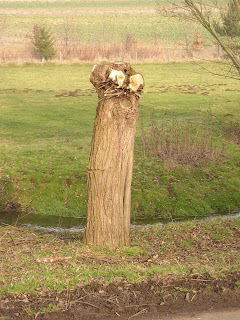 The pollarded willows that line the banks of our river are ancient. Pollarding is the removal of all the top growth of the tree, the timber in the past being used in many ways but, most famously in the manufacture of cricket bats, but now used mainly for firewood. Severe as this pruning is, it prolongs the life of the trees.
Their true age is difficult to determine as they have the strange habit of their outer trunk splitting. This then rots away leaving a relatively young looking trunk to start the process again. I have seen mulberry trees behave in the same way. 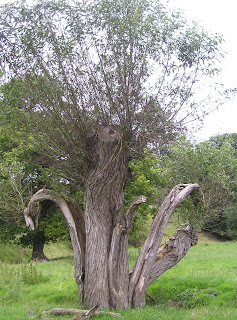 In the garden, pollarding (and coppicing, which is the same type of pruning but at ground level) can be used to advantage. The new growth of the coloured bark willows (Salix) and dogwoods (Cornus) are considerably brighter than the older wood and make a good backdrop to the winter garden.
In England, the pruning is carried out in late February, just before the new growth of Spring starts.
The flowering tree in the photo is, yes honestly, another of our pollarded willows. A wild rose - probably from a seed dropped by a bird - has established itself in the crown. It looks spectacular when in full bloom and confuses everyone that finds it! 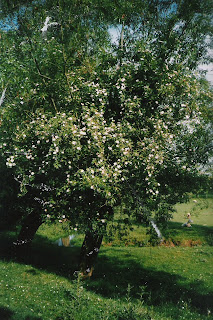