A Walk in the Doone Valley

Exmoor is one of England's smaller National Parks and it is also has one of the most varied landscapes: heather moorland, grass moorland, wooded combes, rushing streams and waterfalls, the lush farmland of the Porlock Vale, high cliffs and sea views.


The moor is especially beautiful at this time of year now the heather flowers, which in midsummer had turned hundreds of acres purple, have changed to a golden bronze. The bracken, also yellowing as the autumn progresses, helps to make the landscape a combination of coppers, oranges, golds, browns and greens. 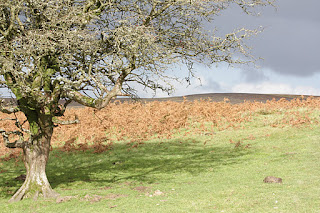 I had returned to my spiritual home to refresh my soul, as well as my body - for I was pretty knackered after a hard summer of gardening - hence the lack of posts recently. I always stay at the Blue Ball Inn, a traditional pub with rooms, where you can be certain of a warm welcome from the blazing log fire in the 13th century inglenook and an even warmer welcome from the owners, Phil, Jackie and Nick. An added bonus of being on Exmoor is that my mobile phone does not pick up a signal for miles so I am isolated from the world. 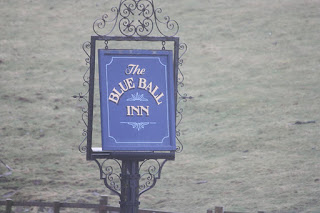 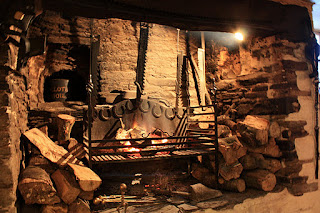 For an English holiday at this time of year, I couldn't have been luckier with the weather either: day after day pleasantly mild and with only a couple of days rain. Perfect conditions for walking and, because it is now 'out of season' with the summer visitors long departed, the moor was even more empty of people than usual. 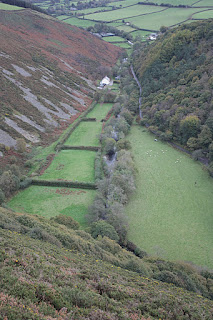 There must be many people that have read R D Blackmore's great Victorian novel, set in the 1600's, or seen the film 'Lorna Doone', yet never visited the area where the action took place or, perhaps, realise that it is an actual place. It is a tale of the Doone's of Badgworthy (pronounced Badgery), wicked outlaws terrorising a remote rural community, of kidnap, love and, best of all, it has a happy ending. It is questionable how much is fact and how much is fiction but the places exist and, even now, there are Ridd's (the hero's family name) living on the moor. The Doone's, if they existed at all, are all long gone. 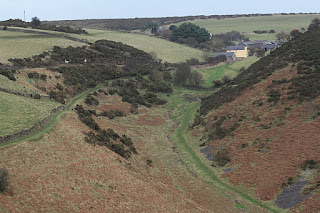 One day, the Doone Valley, their remote moorland stronghold beckoned, a walk of some 15 miles. There are two ways into the valley, the easiest is at Malmsmead, a pretty little place with a couple of houses, farms and coffee shop. I chose the more difficult - and to my mind, more exciting, way across some of the wildest moor, Exmoor can offer. Parking the car at Brendon Two Gates (there isn't a gate in sight - I'll explain how it got it's name another time!), my choice proved wise for I was met by the sound of the wild red deer stags calling, for this was the start of their breeding or 'rutting' season. Standing on the skyline a stag roared, keeping his herd of hinds close and to fend off rivals. As I took a photograph, a flock of curlew flew past, a lucky coincidence and a great start to the walk. The photo is rather small but I doubt if I will have the chance to take a second, larger one!

The moorland here, is a vast, open and empty space, full of bogs to catch the unwary. Although not dangerous in themselves, it is unpleasant, to say the least, to be up to your knees in cold, black, peaty water. A minor injury such as a twisted ankle in bad weather, or as dusk falls, could become potentially life threatening. Squelching my way along, my strong, waterproof boots made light work of this first stage and after an hour or so the first fold of the combe appeared - I had reached the head of the Doone Valley. 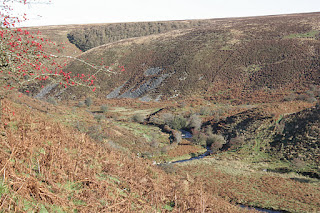 The path from here is well marked, yet even in midsummer, few but the intrepid walk as far. The only sounds are of water rushing over rocks and the occasional calls of sheep, ravens and buzzards. The walk is now downhill all the way as the path follows the river back to Malmsmead although it is still far from an easy stroll. As the walk continues, more and more side streams meet the main river and Badgworthy Water becomes faster flowing and wider, although two or three bounds and you would be across it. This time it was gentle and the sound relaxing: after heavy rains it will become thunderous and capable of sweeping you away.

A third of the way down the Doone Valley, Hoccombe Combe is reached, said to be the site of the Doone's village although the 'waterslide' that John Ridd climbed to reach Lorna is not here. Some say that it is based on the river that runs through Lank Combe a little further to the north.


The photograph below is of the waterslide at Watersmeet some miles further west and not part of the Doone country. 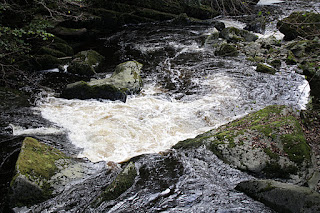 Soon the valley becomes more gentle and lush although the hills of the moor still tower above. There are trees too: larch, beech and rhododendron. Soon the river will run through farmland and to Malmsead itself, a good place for a rest and a coffee. It is also a place where the walk could stop if another car was available to take you back to your starting point. However, I was only halfway and so turned up the steep lane making my way back to the open moorland. 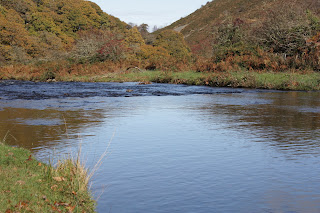 It was a long and tiring walk back across the heather. In the distance a small group of the wild Exmoor ponies, the oldest native breed in the UK and virtually unchanged from pre-history. Athough free to roam the moors they tend to keep to their own territories and are quite tolerant of strangers approaching. Only those that live in the tourist 'hotspots' will allow themselves to be touched and these ones soon galloped off once I got too close. 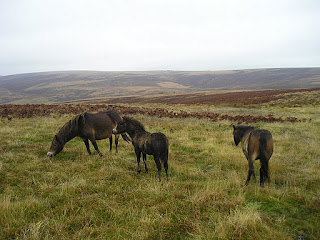 By the time I reached Brendon Two Gates, a pint of ale at the Blue Ball and a hot bath beckoned. It was almost dark when I returned to be greeted by a spectacular sunset, the perfect end to a very satisying day. 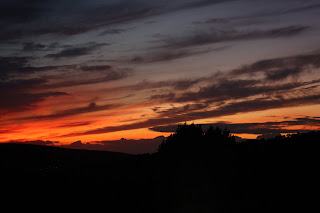 JOHN SHORTLAND, Cotswold Hills, England.
JOHN SHORTLAND, Cotswold Hills, England. John the Writer: It is as natural for me to write as it is for me to eat - and I eat a lot. John the Gardener: It's in my blood - the family discussed plants as others do football. Now I earn my living by it. Lucky chap! John the Countryman: Living in a secret valley of winding streams, fields and woods, deer and badgers. Horses take up quite a bit of my spare time too. John the Explorer: that description is a tad exaggerated - but I've had my moments. It's all in the blog...

click here for daily updates from the secret valley

All text and the majority of images © John Shortland I'm very happy for you to link to or quote for non-commercial purposes with suitable acknowledgement.
.
Occasionally I use images by others which are acknowledged in the blog post. It's probably best if you assume they won't like you using them.If you are even very slightly thinking of using my work for commercial stuff you'd better ask me first.
.
Please do acknowledge the source in full: http://www.johnshortlandwriter.com/