Everyone seems to love poppies. It doesn't matter if they are the delicate crepes of the Icelandic or big and blousy Oriental poppies - even 'though the latter so often lie sprawling across the ground, flattened by the weather or their own weight. But most loved of all are the wild scarlet poppies that create a violent red gash across acres of wheatfields. 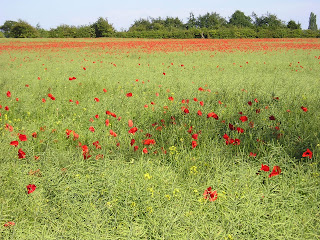 Despite being forever linked with the trauma and sadness of the Great War, poppies refuse to lower our spirits. Perhaps they even comforted and uplifted the tortured bodies and minds of the survivors of the battlefields. The famous lines from In Flanders Field have immortalised poppies in poetry but thirty years earlier that great (but now almost unknown) British naturalist, Richard Jefferies, was eulogising "proud poppies, lords of the July fields....no abundance of them can ever make them commonplace....". How right he was. 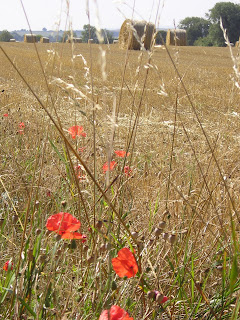 Even the odd, single flower, struggling in a bit of dirt at the side of some waste ground, brings joy and admiration but it is, en masse, when the sight of thousands of them in flower in a cornfield stops you in your tracks and, for a moment, loses you in a heady delirium of colour.


When the steep, wild flower filled grass banks that make the 'walls' of the secret valley have given way to the flatter, arable lands and the lush water meadows and meandering river lie far below, the fields become larger and hidden by high hedgerows. The character of the secret valley is much changed up here: those unfamiliar with it would not know of its existance it is so concealed. The old field names reflect this - lower down the names end with the words 'banks', 'close', 'grounds', 'meadows', now they all end with the word 'downs' and you could be forgiven thinking that you were on vast rolling downland, for the eye leaps over the valley to more cornfields beyond. And, a few days ago, I climbed the old, timber stile that pierces the hedgerow to walk in the field known as'17 Acre Downs' to be greeted by the lords of the July fields. 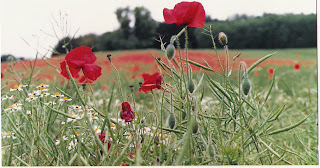 However it was not the sight of crimson stretching as far as the woodland in the distance that stopped me in my tracks for there, at my feet, was a single, pure white poppy. Just one amongst tens of thousands of scarlet. 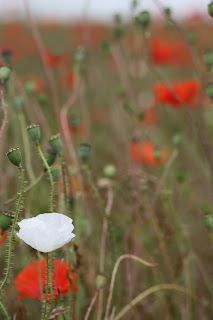 Walking further I was stopped once again, this time by some pale pink blooms, not many, just about twenty. The sight was enchanting and magical. Why here? Why so few? 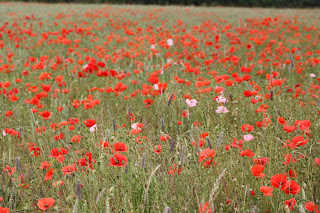 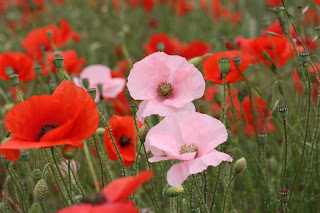 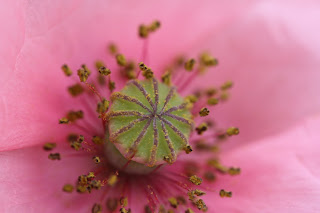 Once you look closely at a poppy in flower you realise just how spectacular it is. En masse, your mind is blown by the quantity and you stop seeing them as individuals. Now, with my senses heightened I realised that a field of red poppies are made up of numerous variations even though pink and white are very rare finds. The photographs below show just a few of these: crimped, streaky, waxy, single petalled, multi petalled, plain buttoned, black cross buttoned, the variations seemed endless. 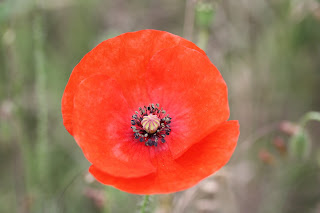 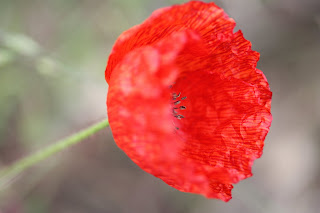 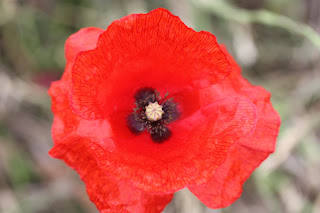 It isn't just the flower that deserves this close inspection. For the seedhead is also quite lovely. Its capsule, before ripened, the palest green with a black and cream striped lid, a black collar, encircles its tall, upright stem, covered with soft bristles. Once ripe it takes on the same golden hue of the corn crop it has invaded. Will these poppies breed true and will there be pink or white ones next year? Who knows, for the next day the field had been mown and, if not for the photographic record, could have been dismissed as a pure figment of imagination. 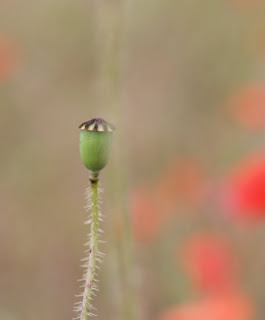