Last summer I spent a day walking on Dartmoor, an area of wild, remote and barren land situated in the south of the county of Devon. Dartmoor is an area of granite outcrops (tors) and coarse grassland, trees are few - except for occasional conifer plantations - and people and properties even fewer. It is a country of streams, bog, cotton grass and silence.
. 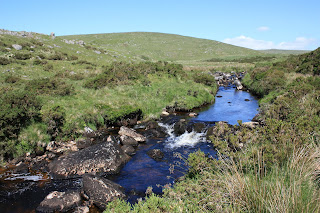 .
Remote and empty it may be now but, thousands of years ago, this was a highly populated area and all over the moor there are signs of occupation of our ancestors. The buildings have long disappeared but stone circles, standing stones , scrapes and bumps in the ground are everywhere as the Ordnance Survey map will show.
. 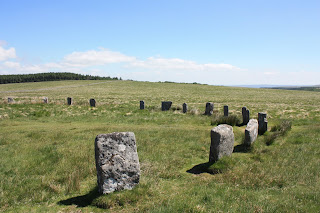 .
The most mysterious and atmospheric sign of these early settlers is the stone circle found to the northeast of Sittaford Tor. Stepping into a stone circle is always a mystical experience: it feels as if our living history has been trapped within them. The spaces between the stones seem to disappear and you feel completely enclosed by them as if the circle 'walls' were completely solid. It feels this way with our own Cotswold stone circle, the Rollright Stones but it feels even more extraordinary up on the wilderness of Dartmoor for there is not one stone circle but two, standing side by side.
. 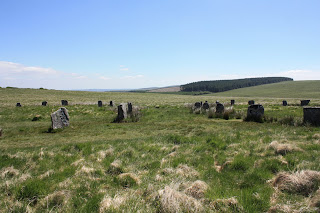 .
Grey Wethers, as the circles are known, get their name from the old English word for a castrated ram. 'Wether' is still a term used in farming and the word is remarkably similar in the old German, Frisian and Nordic languages. It is not uncommonly used to describe large stones that scatter some areas of landscape, whether manmade or left in place as a result of Ice Age glaciation - presumably as, from a distance, they can look remarkably like sheep resting.
. 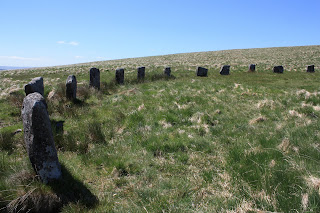 .
Walking amongst the stones, it is difficult to see that the circles are completely separate for they feel as if they are intertwined as in a figure of eight. However, from above (thanks to Google Earth) the circles can be seen to be quite distinct although sitting side by side. The smaller of the circles measures 31 metres in diameter and the other 33 metres, making them the largest circles on the moor. Together, they have 49 stones standing. Much of this information I have sourced from the web (where else?) and more can be found here.
. 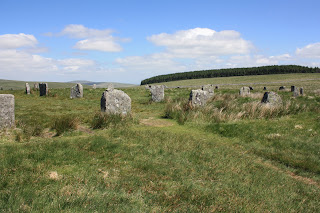 .
What was the purpose of their building, 5000 years ago? Many theories exist but no-one knows for sure. Excavations have shown that there were charcoal deposits here so fire was certainly used - was it for ritualistic purposes? The theory I like most, is that the circles stand on the boundary of two separate tribes and that this was a neutral meeting place. It would be good to find that it was a place of peace for it certainly feels that way now.
. 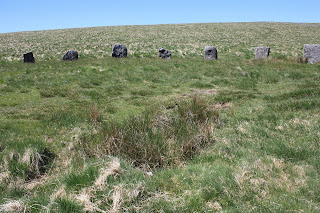 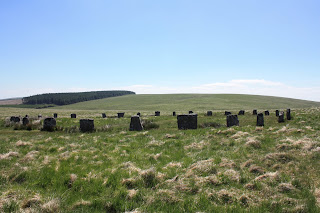 .
To the south of the circles and on the northern bank of the East Dart River are the circular remains of a 'beehive' hut. These tiny buildings of stone with, once, a turf roof were most likely built in medieval times and used as a store or shelter from the worst of the elements. It is surprisingly well camouflaged - perhaps designed that way to prevent their contents being raided by others. More information on the ancient huts of Dartmoor can be found here.
. 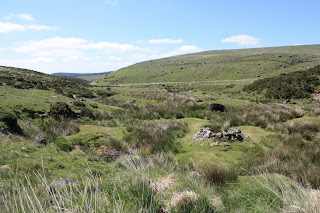 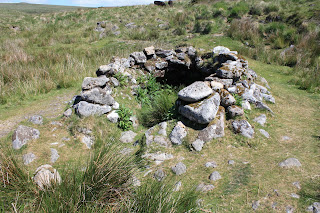 .
After a picnic lunch high on the moor with only the sound of skylarks, cuckoos and buzzards for company, the path descended to the Warren House Inn, a remote (in the past, tin miners) hostelry, some distance to the east. It is said that the fire here has never been allowed to go out since 1845 and it and a pint or two of ale were most welcome.
. 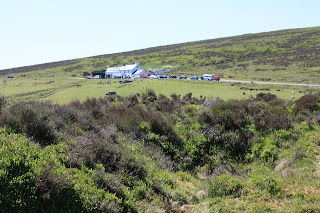 .
Beyond the pub, more remains of old buildings and walled enclosures could be seen, probably of deserted farms or small mining communities. Now, at lower levels, the climate was noticeably more clement and wild flowers provided some welcome colour after the drab greens and browns of the higher moor. The Bird's Foot Trefoil, especially, were covered in beautiful Fritillary butterflies.
. 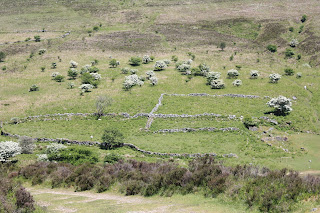 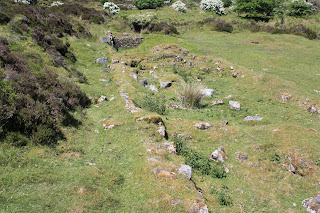 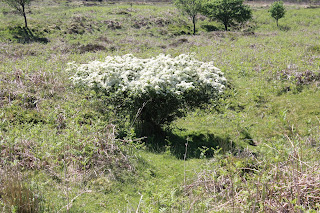 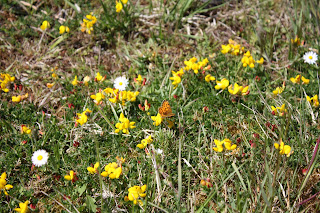 .
Finally, after several hours of walking we returned to our starting point, the village of Postbridge, to cross the river by the ancient stone clapper bridge, featured in one of my earlier posts. This, and more photographs, can be found by clicking the link here.
. 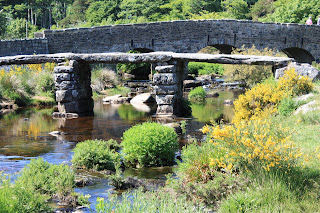