The other day I recalled one of the nursery rhymes that my mother used to sing to me when I was a small child sitting on her lap. Goodness knows why, after so very many years, but no sooner had I done so than the words became true:
.
"The north wind doth blow and we shall have snow and what will the robin do then, poor thing?"
.
Well, the answer is puff up its feathers and stand close to the bird feeding table until it gets fed!
. 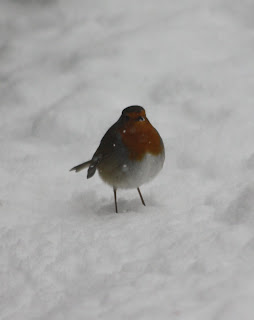 .
It isn't just the robin that demands food in these difficult conditions and there has been a constant stream of activity back and forth to the feeders. The tit family are always welcome - we get many different sorts here: blue, great, coal, willow and long-tailed.
. 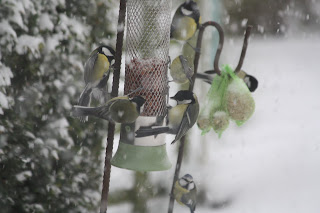 .
It is often stated that British birds are rather dull compared to the exotica of warmer climes. We do have our share of 'little brown jobs' that aren't too easy to identify but what can be more spectacular than the Greater Spotted Woodpecker? With it's red cap and rump and black and white markings, it is a beautiful looking bird. We also have its diminutive cousin, the Lesser Spotted, but these tend to stay out of the garden and feed amongst the willows by the river.
. 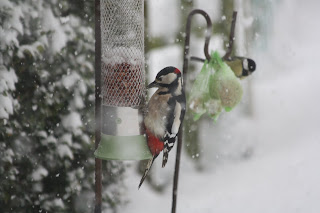 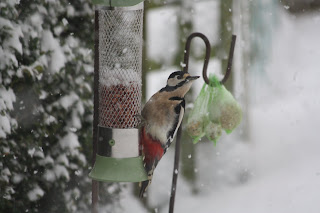 .
The only other resident British woodpecker, the Green, never comes to the bird table or feeders but it does have a store of food available in the electricty pole by the house. Normally quite shy, most sightings of it are of it flying rapidly away in the typical undulating movement that is common to all of the woodpeckers - a useful identification aid. Country folk (I include myself here) always call the Green Woodpecker by its traditional name of Yaffle.
. 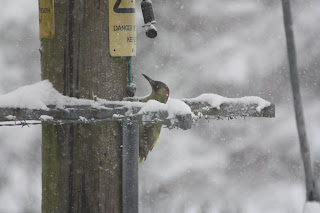 .
Often cited as the commonest Brititsh bird, the Chaffinch is also another colourful bird. Or, at least, the male is. In the photos below the rich salmon pink breast feathers are clearly visible, as are the wing markings, common to both sexes and making the rather dull female easy to identify. Bramblings come to our bird table as well. A less common winter visitor, they are similar to the male Chaffinch; however, the colour is richer and carried by both the sexes.
. 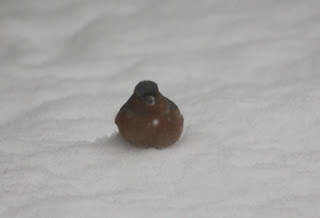 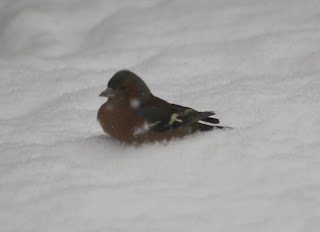 .
The Thrush family are also well represented: here a cock Blackbird waits for food. its yellow bill contrasting with its black plumage (the hens are chocolate brown but still have a yellowish bill). In many birds, the Magpie for example, black becomes iridescent green when seen in certain lights. The Blackbird is jet black and all the more handsome for it.
. 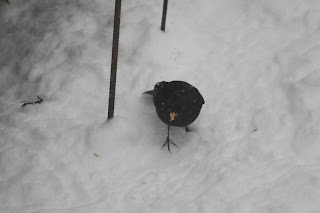 .
Only coming into the garden to raid the shrubs of berries or fruit from trees, the winter visiting Redwings and Fieldfares (close relatives of the Blackbird) feed in large flocks throughout the secret valley. I managed to catch this photo of a Fieldfare eating our apples before it flew off.
. 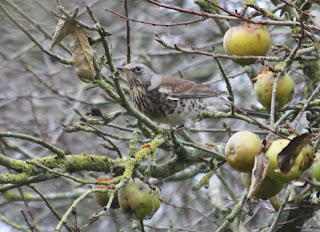 .
The sheep almost disappeared in the blizzard yesterday. Today the weather is calmer and this crow is taking advantage of searching for food in one of the ewe's fleeces.
. 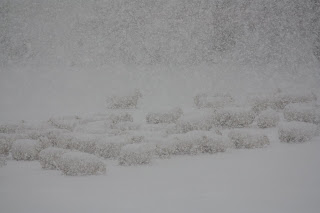 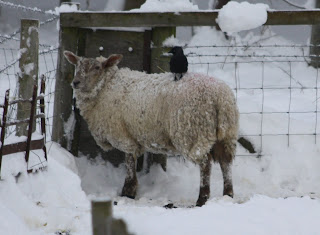 The snow - which is very unusual around here before Christmas - looks to hang around for a while, with more forecast next week. I cannot remember the last time we had one but, perhaps, a white Christmas may be a reality rather than just a picture on a card. If so, I shall have to write a post quoting Bing Crosby.....