A Roman Villa in the Cotswolds

These days the Cotswolds, with its rolling landscape, dry stone walls and picture postcard villages, give the impression of being sleepy and sparsely populated, basking (or some may say smug) in its glory of being one of the jewels of the British countryside. But this is not so. For it is a working landscape with its people going about their daily business, admittedly often in an unhurried way - for our narrow lanes and lack of motorways limit the speed that one can travel. And often our straightest and, therefore, easiest routes have not been made in recent years but by Roman settlers, attracted to this region some two thousand years ago, for much the same reasons as we are now.
. 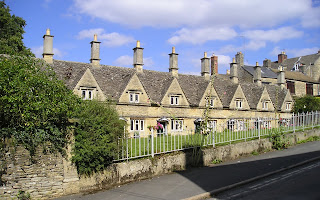 .
Ryknild Street, Fosse Way, Akeman Street, Ermin Way - just their very names conjure up images of Roman legions marching long distances through the country - linked their towns and cities with Corinium, now our modern Cirencester, the centre of both their commerce and entertainment (it still has the remains of a Roman ampitheatre that held over 8000 people). And, as time passed, they settled in more remote parts of the Cotswolds too: one such place is the villa built at North Leigh, near Witney. The track that leads you to the remains is as straight as any other Roman road but was used solely by servants and traders, the owners and visitors arriving by a more grand approach no longer visible.
. 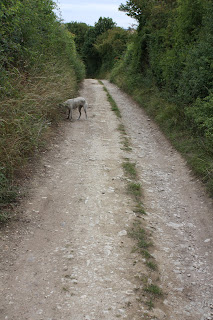 .
Now cared for the nation by English Heritage, admission is free and the site is open all year. Strategically placed notice boards explain the layout of the 60+ rooms and of its history but nothing quite prepares you for the sheer size of area which seems at odds with its present day position - somehow, you expect a small cottage sized building. In fact, the first thing I noticed was the irrepressible She-dog who had run on ahead, in order I imagine, to steal the limelight, as usual!
. 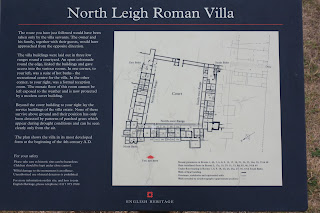 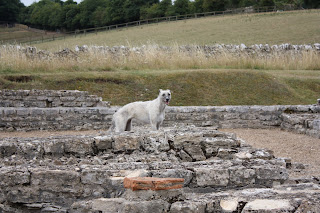 .
One of the greatest pleasures of exploring the remains is that they are relatively unknown and so are rarely visited. I explored for over an hour and saw no-one - just perfect! The photos below show the north west range and also the south east range. Beneath the floor of the latter even earlier remains of a hearth were found , dating back to the Iron Age, circa BC100.
. 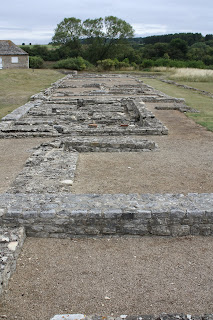 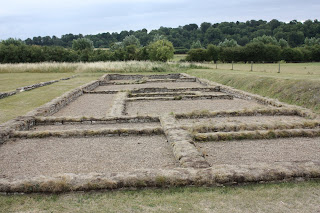 .
Although the site was known as early as 1783 it was not until the early 1800's that the ruins were excavated, the first plan published in 1823. Further excavations took place in 1908.
. 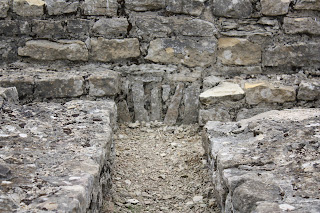 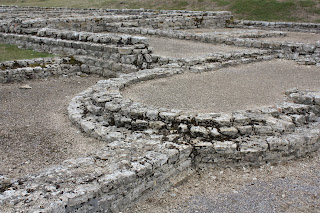 .
The remains of the under floor heating can be clearly seen in the photographs below. It is strange how such an 'advanced' civilisation could then be plunged into the relatively primitive period of the Dark Ages after the Romans left.
. 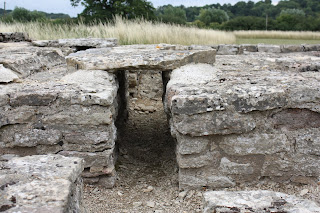 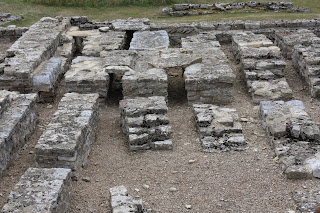 .
In amongst the stonework of the walls pieces of tile protrude. No matter how carefully I looked I saw no signs of pottery.
. 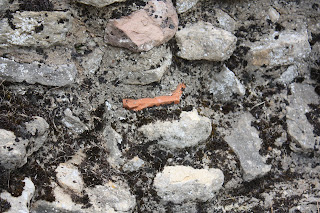 .
The'jewel in the crown' of the villa at North Leigh are the mosaic floors. Several were discovered and lifted, presumably to a museum although I do not know which. However, the floor of the dining room, discovered in 1816, in the south west wing has been preserved in situ and is protected from the elements by a modern building. The mosaics were laid by craftsmen from Corinium in the fashionable geometric style of the time.
. 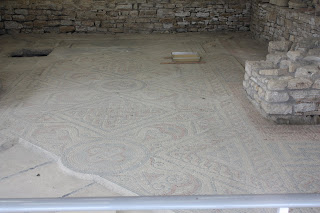 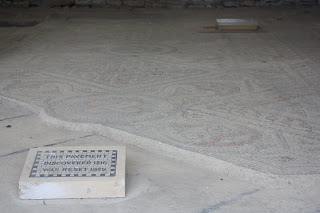 .
The dining room, again with underfloor heating, had a vaulted roof supported by columns, parts of which can be seen against the back wall of the shelter.
. 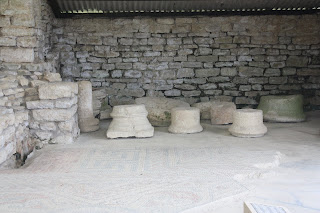 .
Who were the people that lived here and why was the villa suddenly deserted in the fifth century when it was so obviously thriving a century earlier? It is probable that they were farming here so perhaps there was a change in climatic conditions or with the water supply. Whatever the reason, it is now the most perfect spot to sit and ponder in total peace and quiet.
.
.
.