Anatomy of a Flower Arrangement

How often does a garden plan go awry only to find that you have something equally as good, if not better, instead? This is what happened to one of my designs, a large area taking up almost one quarter of a walled kitchen garden.
. 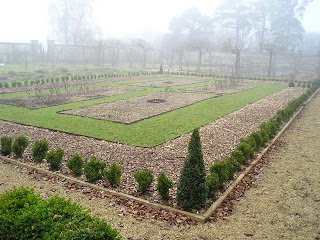 .
Formal beds, surrounded by box(wood) hedging and topiary, were planted to create what was to be a tisane, or herbal tea, garden. All the plants were supposed to be suitable for making infusions for either medicinal or culinary use. Something went wrong and, for reasons unknown, half the plants either died or refused to flourish. In desperation, we turned it into a cutting garden where flowers could be harvested for arrangements for the big house - actually, the mystery house I used to dream of as a child. I have written about this house before and the tale of my arriving there two hundred years after I had died.... 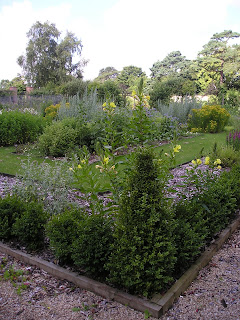 Concentrating on those plants that survived the initial planting, I decided to see how they would cope with being used as cut flowers and the result was much better than expected. The flowers were cut in the middle of the hottest day of this year so far - not ideal conditions - and then plunged up to their necks in water for the rest of the afternoon. They looked poorly and drooping when first arranged but perked up overnight and now, ten days later, look as fresh as ever. 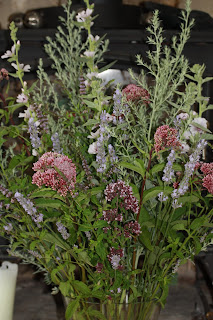 .
Much of the structure is created with a framework of Artemisia 'Powis Castle'. I find that to get the best results it is necessary to prune this shrub down to ground level each spring. They then produce long wands of stunning silvery foliage. A bitter herb used for all sorts of ailments, I would have to feel very ill before I would consider drinking a tea made from this!
.
At this point, I should stress, that I am no herbalist so I do not recommend that you try out any of these plants without deciding for yourself whether they will do you good or kill you instead.
. 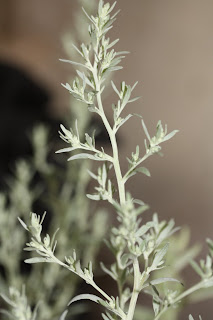 .
Hemp Agrimony, Eupatorium cannabinum, is a British native plant, normally found growing in damp places but quite happy in the garden border. The Joe Pye of America, it is claimed that it is good for many different ailments but especially good for gout.
. 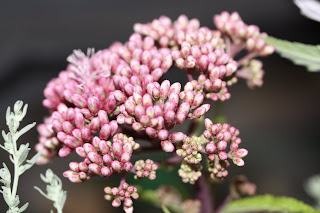 .
A big surprise, was this Spearmint. In the cutting garden it has grown exceptionally tall (and like all mints, proving rather invasive) with attractive, fine flowers. This is, of course, one that I can safely recommend for use as a culinary herbal tea, very refreshing on a hot summers day and good if you suffer with indigestion.
. 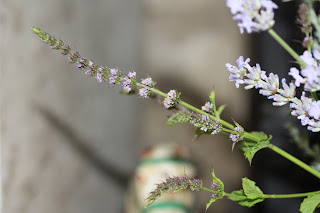 .
Lavender needs no introduction. Oddly enough, because of soil conditions, I thought they would struggle in this garden. Instead, they have thrived.
. 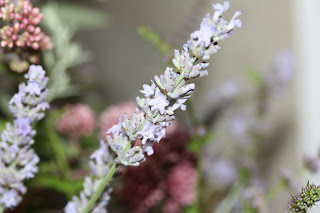 .
Marjoram, another common herb that grows wild in England on sunny banks, also needs no description from me. It is our best bee and butterfly plant in the garden, even outrivalling Buddleias. We grow it in huge patches throughout the garden.
. 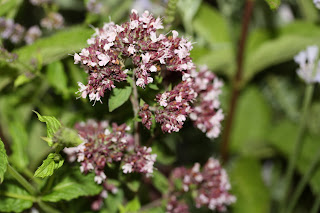 .
Leaving the best to last and the biggest surprise of the lot! Marsh-mallow, Althaea officinalis, another UK native. This was the first time I had grown it and it is now one of my 'signature' plants that I try to incorporate into every design. Related to Hollyhocks but only about half their height and very much more delicate in every way, except one - they are as tough as old boots!
. 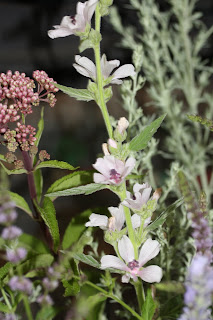 .
Beautiful, downy, soft-as-velvet leaves and the merest hint of pink flowers, they require no staking, suffer from no pests or diseases and grow year after year, getting ever stronger. And, of course, you can always make marshmallow sweets to eat from their dried, powdered roots.
. 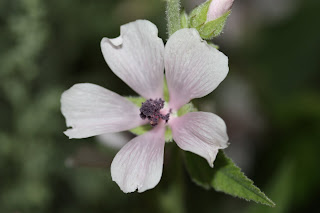 .
This recipe comes from my old herbal, although I have never tried to make them:
2oz marsh mallow root, 14oz fine sugar mixed with gum tragacanth and enough orange flower water to bind altogether. Quite what you do after that I have no idea - perhaps just eat them?
.