...go out in the midday sun, according to the song sung by Noel Coward. But I don't think it was the noon heat that made She-Dog behave more like a deranged She-Devil, I think it was an extremely herb scented and squelchy bog that got her all worked up. Although she does certainly looks completely mad in this photo! 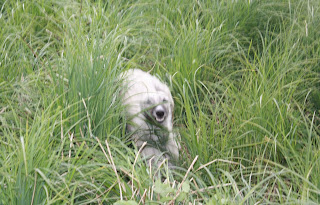 I had gone to investigate the wetland that is below the fields where we keep the horses. The horses have access to this area too and, like She-Dog, become totally hyper when they have been grazing it. It is necessary to keep your wits, as well as your nerve, when Henry, Barney and Rambo come galloping and bucking and rearing their way up to you after they have spent time in there. The overwhelming scent is of water mint but meadowsweet is also very dominant - perhaps it is one of these that gives them all this burst of energy. If so, I should try eating some too.
. 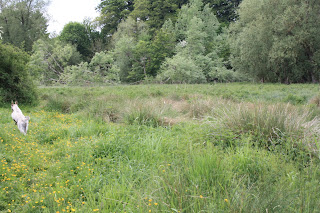 The purpose of the visit was to photograph dragonflies but, needless to say, thanks to She-Dog, it proved virtually impossible. She turned what is usually a peaceful, rarely visited by humans, wildlife haven into a race track. However, I did manage to get this photo of the Common Blue Damselfly, Enallagma cyathigerum. It is found near water everywhere. In fact, it is one of those few species in the animal kingdom that is found virtually throughout the northern hemisphere. 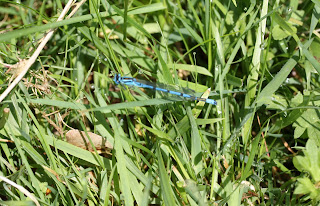 A lurcher and part whippet, She-Dog can run pretty fast but I have never seen her move so rapidly and for as long as this day. Back and forth, round and round - even when we came to the river she couldn't stop galloping through it. It reminded me of when we had deep snow, the first she had ever seen, earlier this year.
. 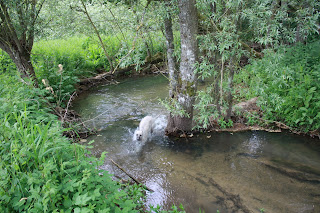 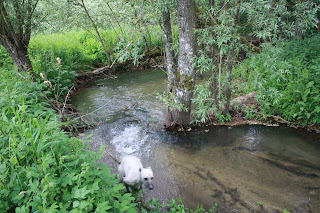 A fallen tree brough about another burst of energy, just when I thought she had settled down. Ignoring her as she investigated the bridge that it had created, I was surprised and somewhat alarmed to discover her seven foot up in the canopy. Before she could be rescued she took a flying leap to the ground below, landing in a heap, before accelerating into the distance. 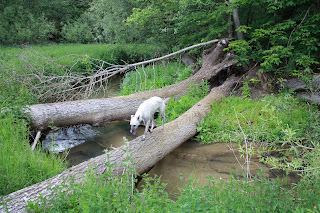 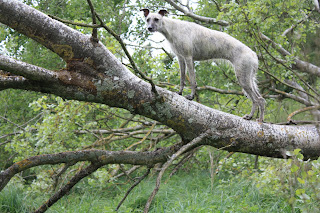 She-Dog's madness meant that very little in the way of wildlife was seen. I had to content myself with being in peaceful surroundings on a warm summer's day, listening to the brown trout rising for mayfly. I spent some time trying to catch both trout and fly on camera and just about managed to get a trout breaking the surface of the water. 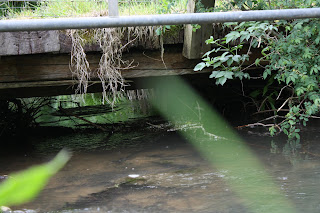 It was only when I returned to the car I was able to get a picture of the elusive mayfly - there was one resting on the door. The vagaries and frustrations of being a wildlfe photographer, I suppose. I think I shall stick to gardening for a living! 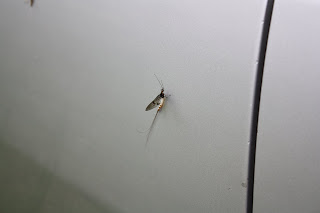