A little, winding river flows through the heart of our secret valley. As far as rivers go it isn't still, it isn't deep and it certainly isn't wide - you can jump across it in places. But it is important: in its very short journey of 15 miles from start to finish it passes through several historic country estates where it has been broadened to form ornamental lakes for fishing and pleasure. The photograph on the header of this page shows the river just above our home.

You wouldn't believe
there was our valley in this photograph. It's just the other side of this hedge - no wonder no-one knows it's there! It's also time to meet She-dog, our lurcher, who insisted in being included in the photograph.
Outside our cottage
and just downstream, the river has formed 'our' lake (really only a little larger than a pond, but that description doesn't seem to give it enough dignity) where, today, I watched a kingfisher perched on a low bough of a willow. A flash of iridescent blue and orange and it was gone, its shrill call giving warning to all around. 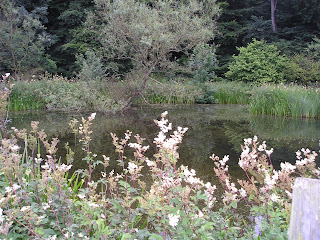 Pretty as they are, the lakes were built for a purpose. In winters past, their frozen water would be carried to specially built ice houses: pits made from brick or stone, deep underground. When full they would be sealed making ice available throughout the summer months. Of course, this was only available for the wealthiest few and it was in the kitchens of the gentry that ice cream recipes were devised - a luxury unimagineable to the poor cottagers. They often struggled to feed themselves the most basic diet.
<
Many of these ice houses still remain, usually derelict and unsafe, but sometimes restored and open to the public to view.