The Dog with the Poorly Paw

Deerhounds are the gentle giants of the canine world: despite their size and, to some people, fierce looks (never fathomed that one out!) they are docile, kind and trustworthy.
Sometimes known as Scottish Deerhounds, they are one of the oldest and least changed of breeds.  Scenes depicting hunting with dogs almost identical in appearance to them can be found on ancient pottery or manuscripts and because they have never become a ‘fashionable’ breed the excesses of inbreeding for the showring has not occurred. 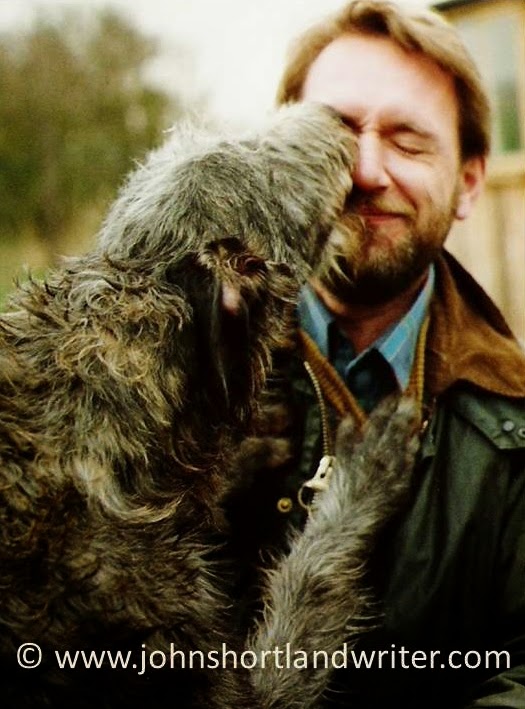 Deerhounds are not for the faint-hearted!
Similar in bone structure to the greyhound, this is most obvious when the dog is wet and its wiry, long coat clings to its body.  Although not as fast on the flat, over difficult ground it can easily outrun them.  It is also slightly larger reaching 32” in big males and can weigh up to 50kgs.  There is little variation in colour, blue-grey being the most prized but in earlier times there were a variety of colours, now all lost. 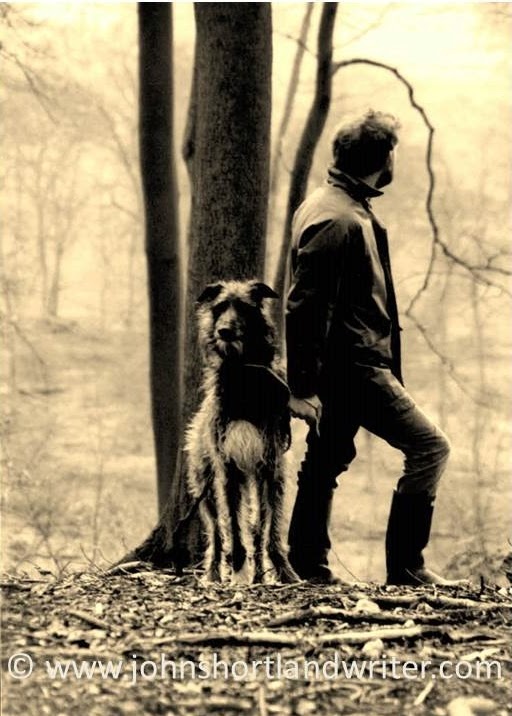 the dog with the poorly paw
Tarff, my first deerhound and named after a Scottish loch, proved to be a near disaster.  Soon after he arrived and playing in the garden, he knocked his leg.  After a moment’s yelping it was forgotten by both him and me until his paw started to turn outwards; he had damaged the leg’s growth plate, resulting in the bones growing at different rates.  By the time of his first operation his paw faced backwards; treatment and further operations made it gradually turn again towards the front.  It never quite made it and as a result he was instantly recognisable by his 45 degree turned out foot.  Once strong and hardened it really made no difference to his mobility. 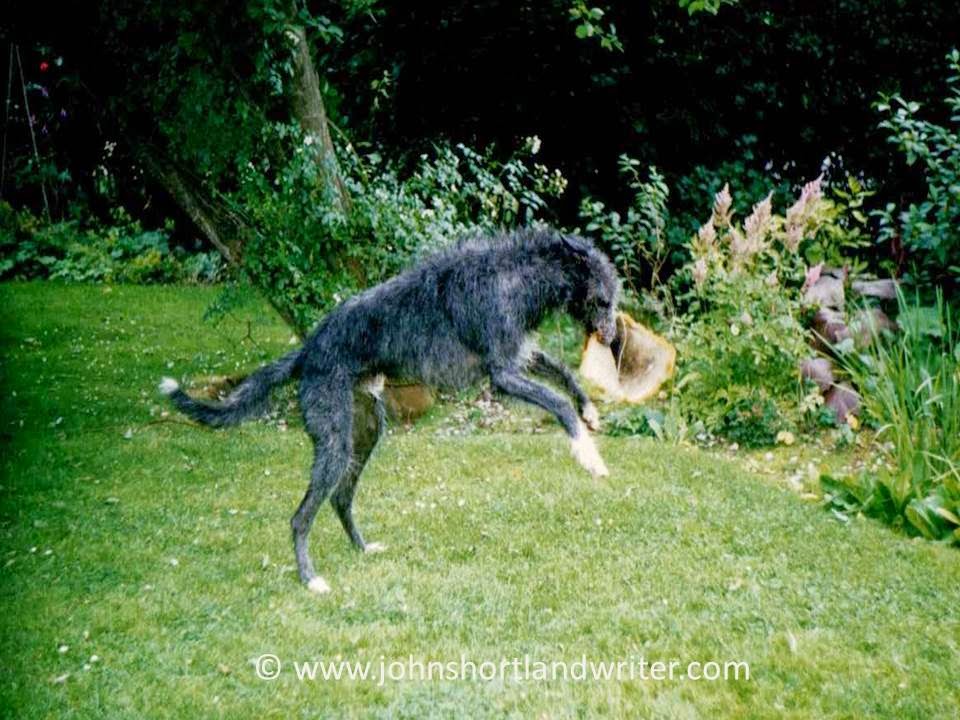 unruly teenager
Having been told that he was unlikely to survive the operations and during that time was to have no exercise he was spoilt unmercilessly.  Proving the pessimists wrong, he became the deerhound from hell – an unruly and totally undisciplined teenager. An uncontrollable dog with the weight, power and speed of a deerhound can be lethal and a rigorous training regime had to start, carried out in short and frequent bursts.  He excelled himself and became a great companion for several years. 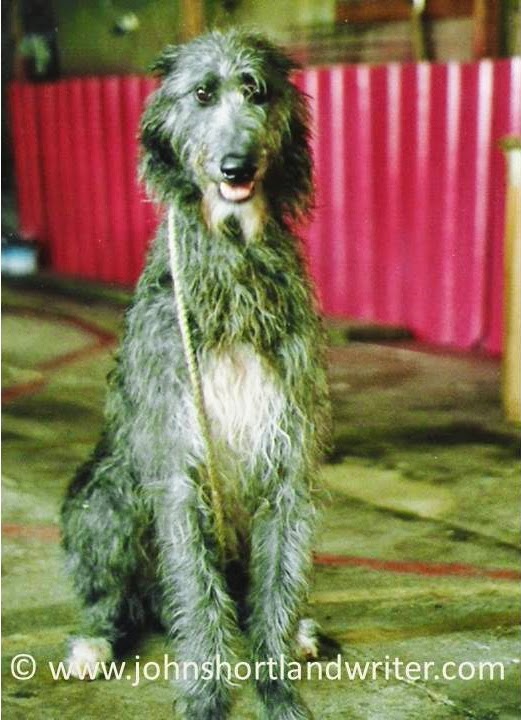 the 'butter wouldn't melt in my mouth' look
It is always heartbreaking when a much loved pet dies, regardless of its age but sadly, as is common with the other giant breeds, deerhounds are not long lived.  Tarff died at just seven years old although others that followed lived to thirteen, a great age for a deerhound. 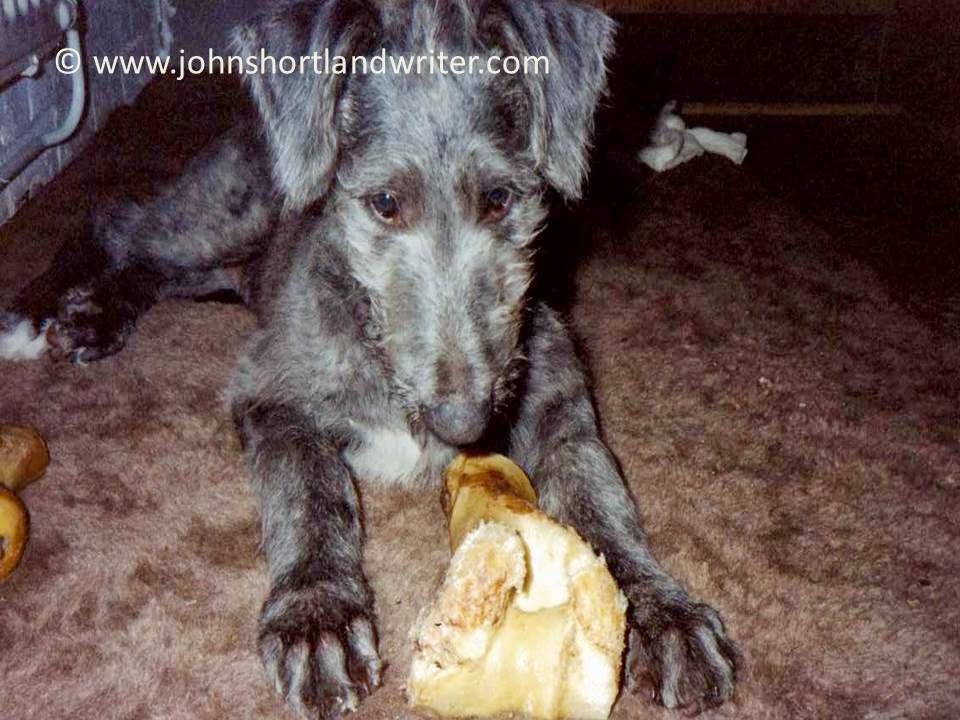 just twelve weeks old, the 'greyness' comes later
Would I recommend a deerhound?  Probably not, despite their many good traits: they are docile, kind and trustworthy and have no agression in them.  They are also quite silent which can be an advantage – but not if you are looking for a guard dog.  However, they need frequent, although not especially lengthy, excercising and it is essential that they have free running.  Being sighthounds, they are great chasers which can be an issue, especially in suburban areas.  Mine have all proved to be great pets but I doubt if I shall have more despite having unlimited access to open countryside from the back door.   These days I am content to pet other people’s deerhounds assuming the dog allows it for this is another of their odd traits: a deerhound can be aloof at times.  It is the one that decides if cuddles are allowed, if not it will pretend you just don’t exist. 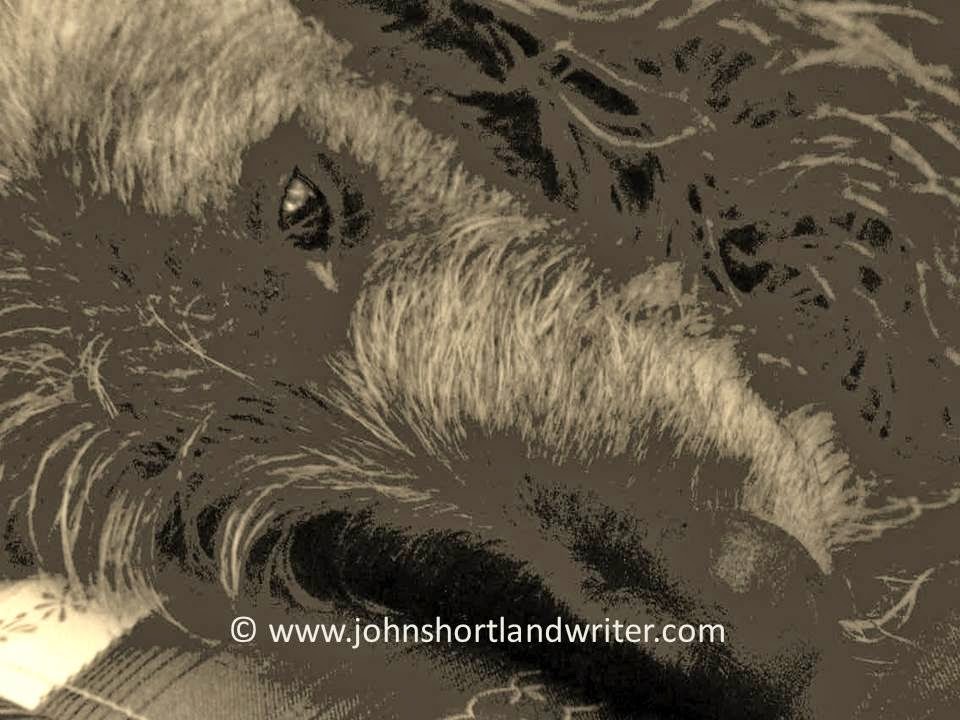