All is Safely Gathered In?

The air is heavy with the scent of harvest.  Is it the summer heat that produces the heady smell of fresh straw or the act of cutting it?  Probably a combination of both but the result gives mixed emotions for, whilst there is something very comforting about knowing that the corn is safely stored and the livestock will have plentiful winter bedding, there is also a tinge of regret for it is the first sign that autumn is rapidly approaching. 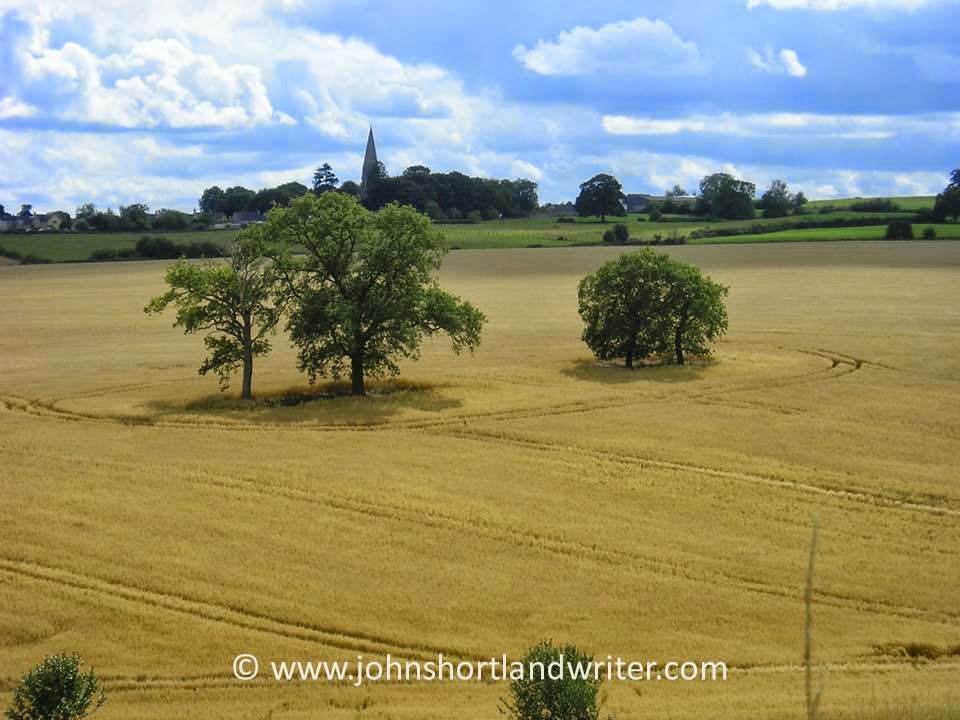 Harvest is one of the few events in the modern farming calendar which gives an insight into the ways of country life of generations ago.  These days, for most of the year, farming is a solitary occupation with a skilled tractor operator carrying out the tasks of many people.  Now the fields often seem empty, quiet places, devoid of human life or activity. Even fifty years ago there were more people working there but go back even further, say another hundred, and there would have been the sights and sounds of dozens of people working from dawn until dusk, racing against the weather.  A poor harvest then meant months of hardship and hunger for many.  Modern harvesting, albeit for a much shorter time is when the fields seem alive once more with combines, grain trucks, straw wagons and the like. 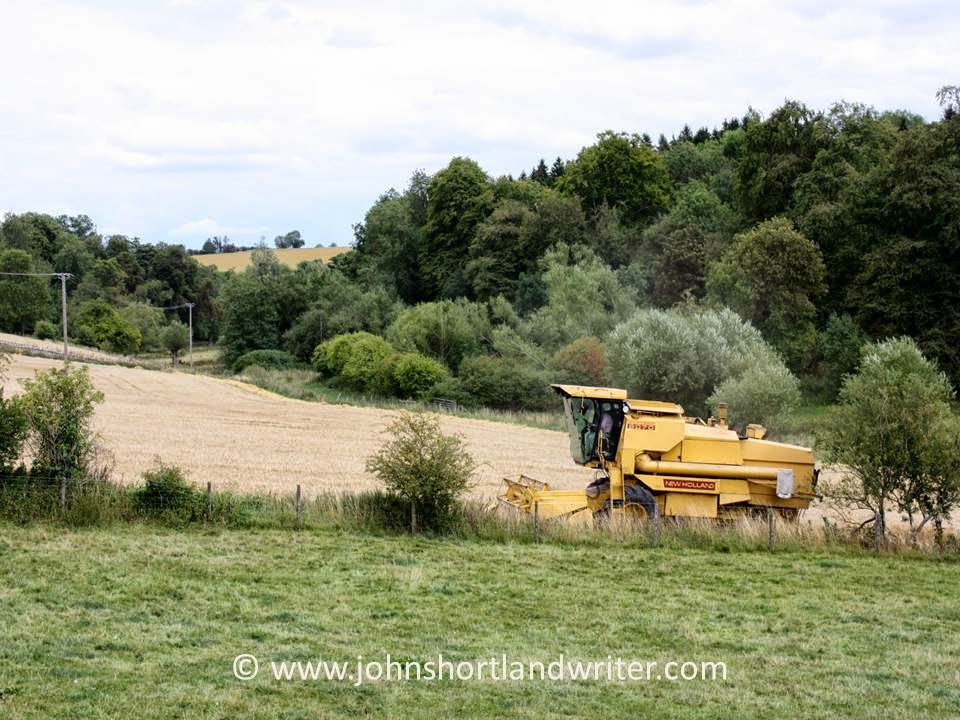 The image below is taken from a nineteenth century farming manual belonging to my great, great-grandfather, and it demonstrates just how many people both men and women, were required for harvest. There were the mowers with their scythes, the gatherers, the bandsters who bound the sheaf together and then set them in ‘stooks’ to keep dry. Finally, the raker would clean up all fallen straw and grain for none could be afforded to be lost.  Harvesting by hand was surprisingly speedy for a skilled mower could cut over an acre of wheat in a day.  However, by the 1880’s virtually all corn was harvested by horse drawn machines. 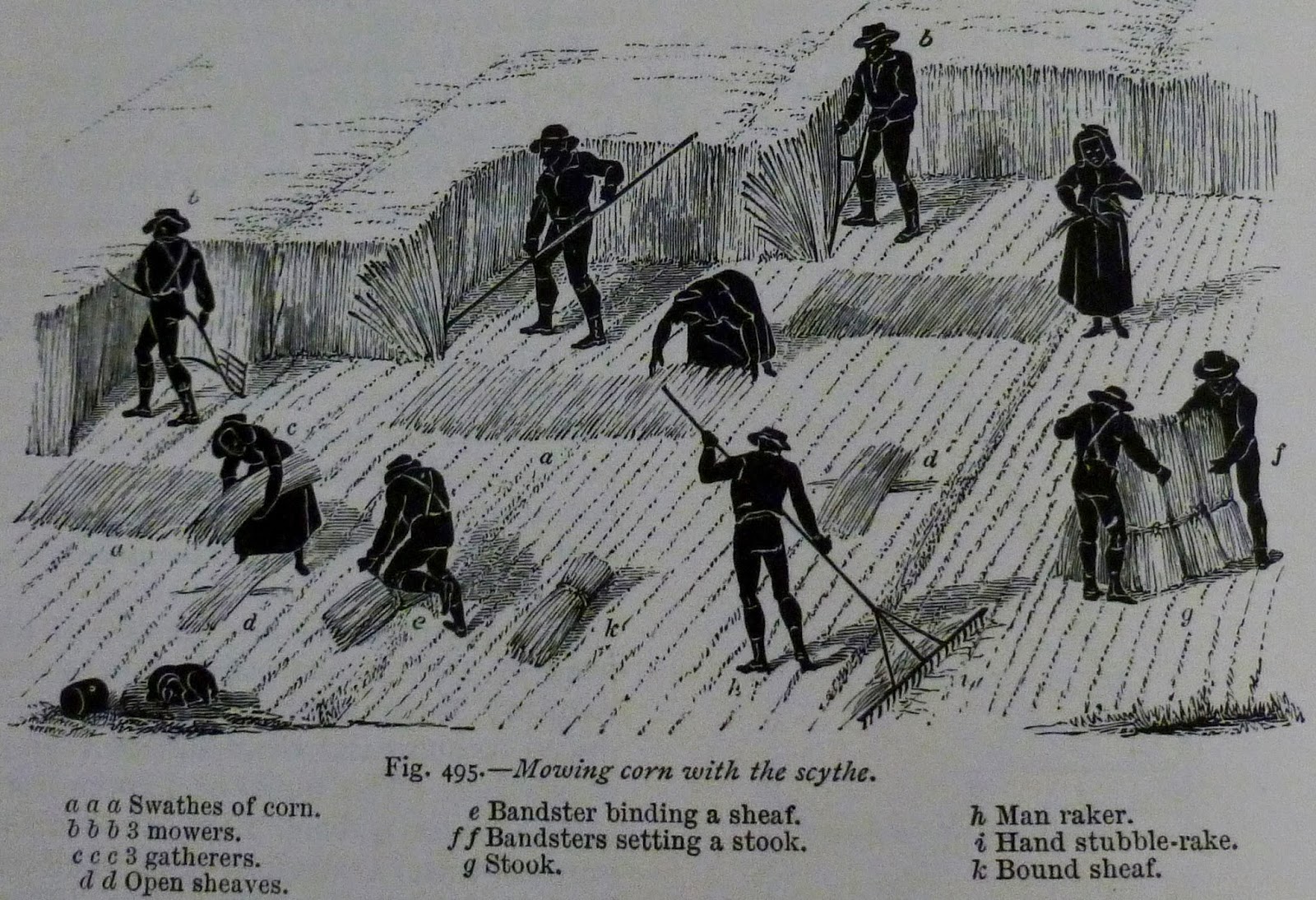 Many attempts were made to design a harvesting machine throughout the centuries – the earliest, using oxen, is described by Pliny two thousand years ago.  The binder – as seen in the wonderful engraving also taken from g-g-grandad’s book - which cut and tied the corn into sheaves in one operation, first came into use in the 1850’s; it continued to be used for another hundred years: by 1979 when the photograph below was taken it was an eccentric rarity. 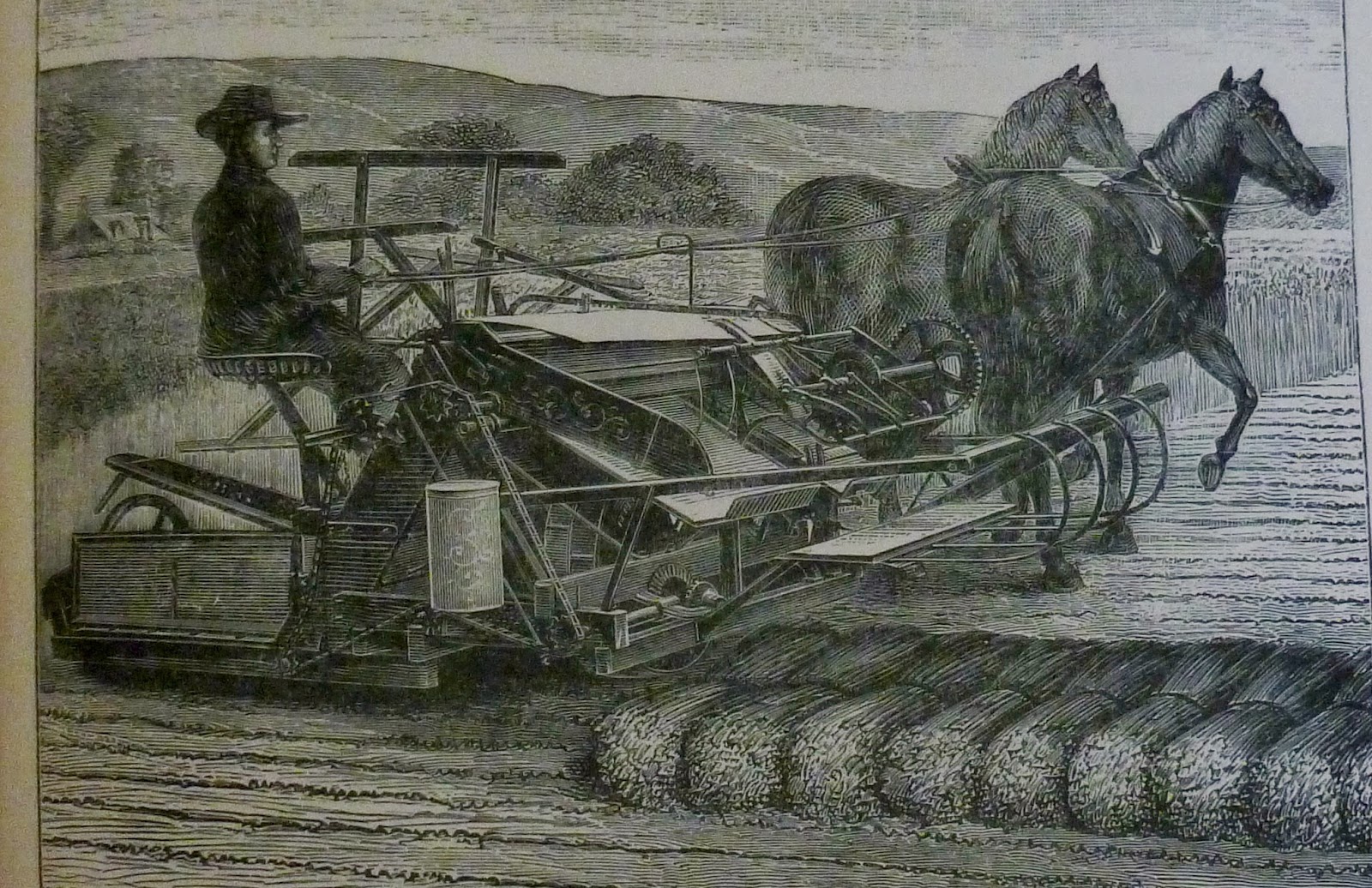 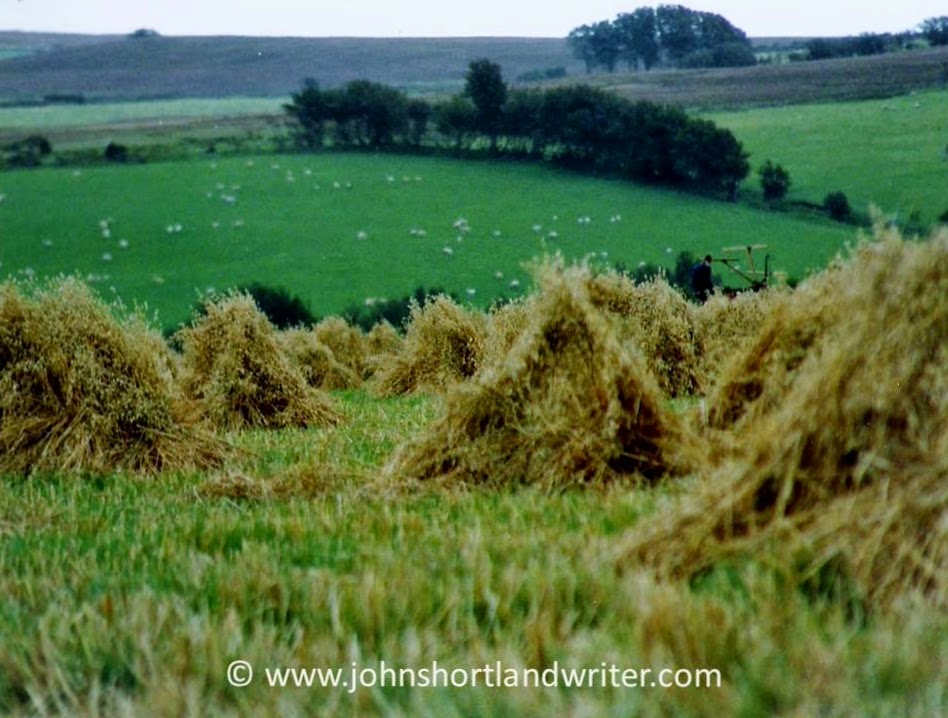 the binder can just be seen on the middle right of the photo
Combine havesters are giants compared to the binders of old and when they travel through the secret valley they take up the full width of the lane with very little room to spare.  First to be cut is oilseed rape, the crop that turns vast swathes of the British countryside bright yellow in spring.  The resulting stubble, unlike that of corn, is sparse and sharp and makes for uncomfortable walking on. 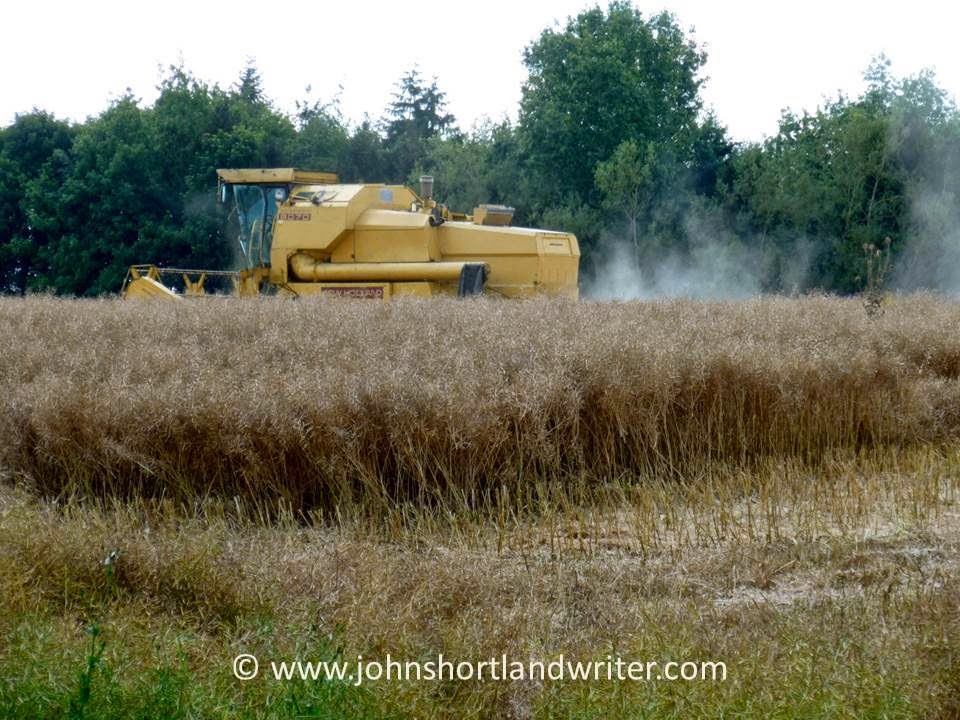 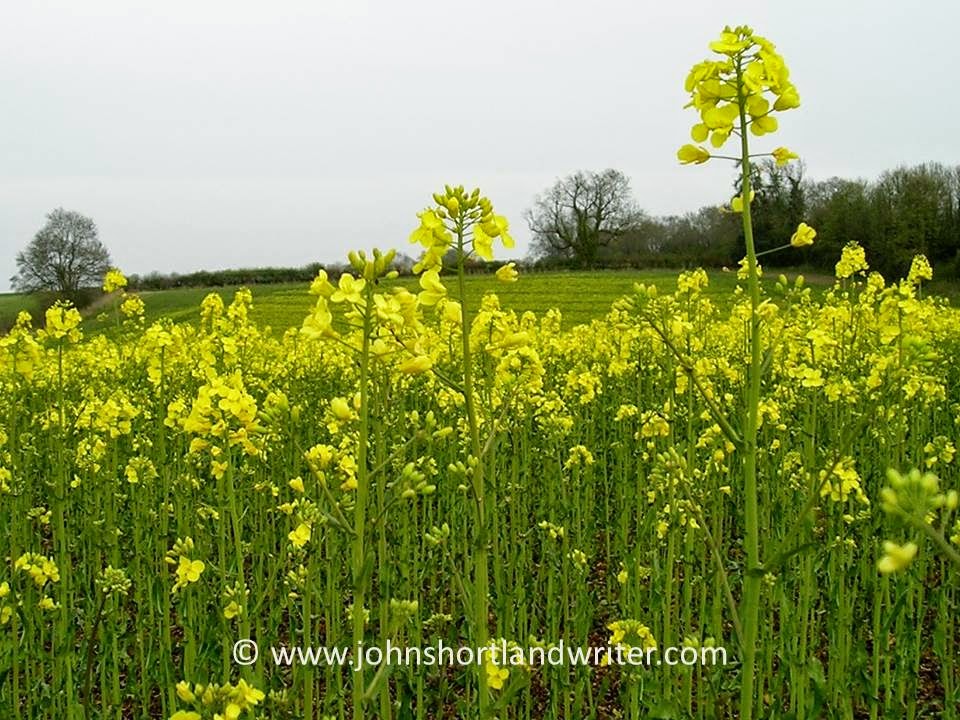 Barley, oats and wheat – which in the UK are collectively referred to as ‘corn’ – then follow with each crop (and its straw) having its own requirement and characteristic.  Modern technology may have shortened the number of days it takes to bring in the harvest but the working day is just as long as it ever was for the combines work from early morning to late at night, providing the crop doesn’t become damp with dew or rain. 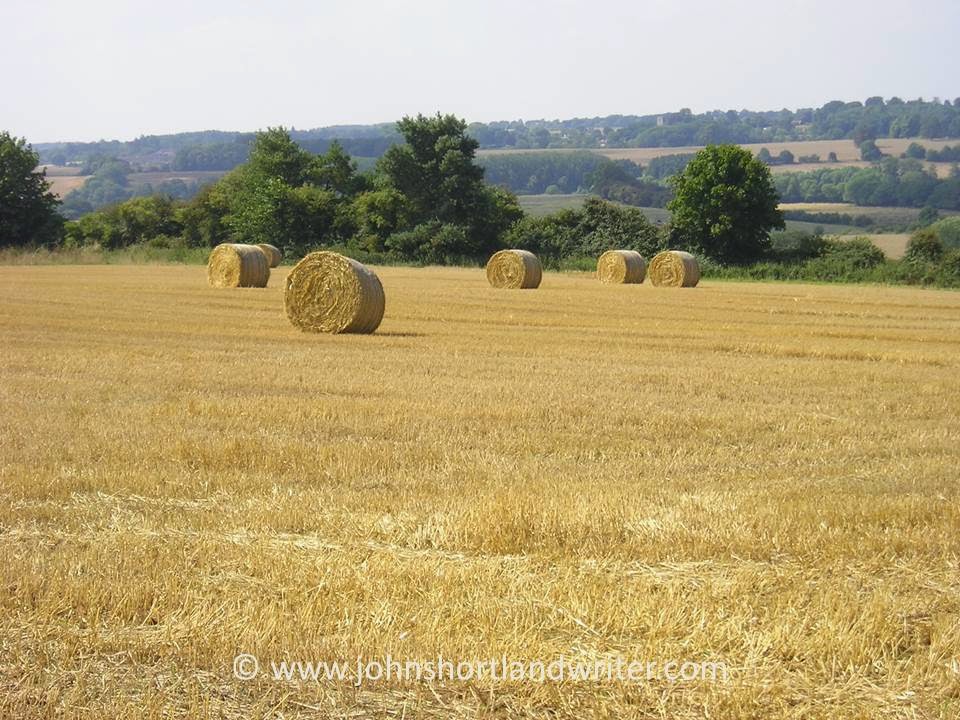 Harvest has always been dependent upon the weather so it is not surprising that upon completion celebrations take place.  Although the traditional Harvest Supper is now mostly a thing of the past, the Harvest Festival church service is still one of the most popular.  On Exmoor - where I helped with harvest in my early years - and typical of a remote, tightly –knit community, every window ledge and the altar of the church would be decorated with flowers, fruit and vegetables.  Pride of place was given to the first stook of corn cut from the field. Packed with families that had been too busy to meet one another for several weeks the hymn ‘Come Ye Thankful People, Come’, written by Henry Alford in 1844 a line from which the title of this blog post is taken, and a great favourite of the farmers, was sung with gusto. 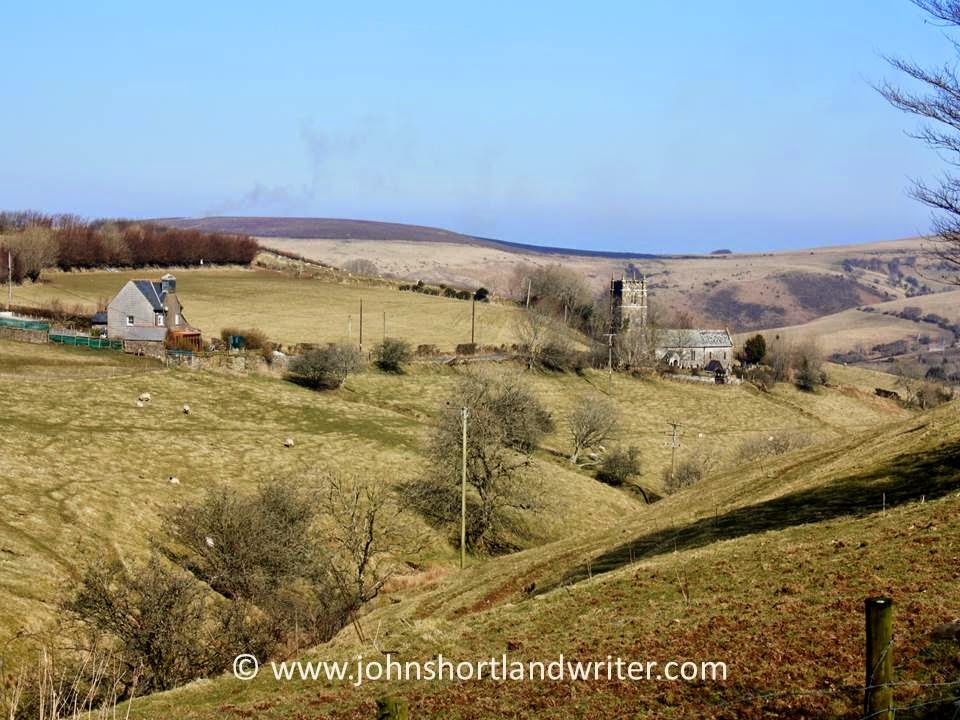