Exmoor - at it's best

Followers of this blog may have noticed a gap - I have been away on Exmoor. How I love that place! First visited just over 40 years ago, it seems to be an unchanging landscape, partly due to it being one of England's National Parks. Of course, there are changes but they do not seem to have altered the character of the place much and the changes are subtle - removal of signposts to (I assume) dissuade drivers from taking their cars down impossibly steep roads and over almost impossibly narrow bridges. And, up on the high moor, passing and parking places for cars are slightly larger to allow for an increase in visitors. 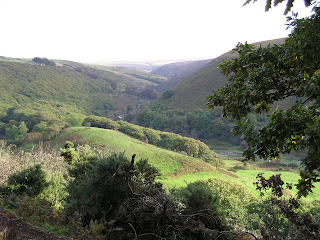 October on Exmoor saw weather changes from day to day: one moment mists, another driving rain and cold winds but, more often than not, warm sunshine. How many times do walkers get fooled into wandering on the moor only to find the mists creeping up the deep coombes (as the valleys are called here) before spreading out across the wider, open spaces where landmarks are few and bogs many? To my knowledge, deaths in the bogs only happen in fiction but a cold plunge to chest height in sticky, peaty water and a twisted ankle miles from anywhere has the potential to be fatal. 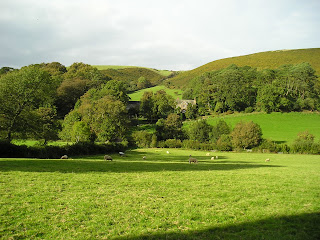 The wild ponies of Exmoor are one of Britain's oldest native breeds and survive all year finding their feed on the moor. During this month they are gathered up by the local landowners and checked over, branded and the foals weaned. These are normally sold at the annual, local pony sales although this year, for various reasons, the sales have been cancelled leaving a gap in the social calendar, for the sales are one of the great meeting places of the widely scattered population. 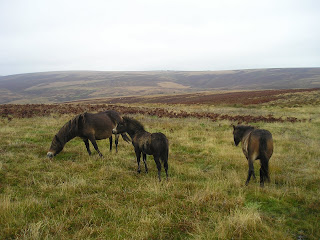 Another meeting point is the local hunt. On Exmoor, there are packs of staghounds as well as fox, for the moors are one of the few places where the Red Deer still run wild in England. With the change of law, only two hounds now hunt the deer, the unfortunate creature having been selected by the Harbourer - a local person who knows both the deer and the moor inside out. Once the correct deer has been found and separated from the rest of the herd, the beast is shot. This is a necessary culling as the population is continually increasing to the detriment of both the moor and the deer themselves. 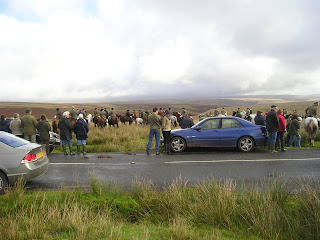 Hunting is becoming ever more pouplar as the crowds and cars, pictured, prove. As soon as the hunt moves off across the moor the crowds get left behind and, with the hunt hidden deep in the coombe, the moor seems deserted once again. 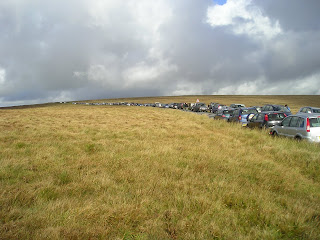 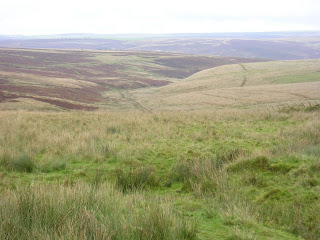