Whether you love it or hate it, hunting with dogs has been part of the country way of life for millennia: it was mentioned in Greek mythology and must have a much earlier history even than that.  These days in the UK there are many restrictions to hunting with a pack of hounds.  This hasn't prevented the hunts from adapting their practice to continue within the law; many now track a human quarry or laid trail.    This post, however, is not a treatise in support for or against hunting, it is only about one of the most delightful of hound breeds, the Beagle. 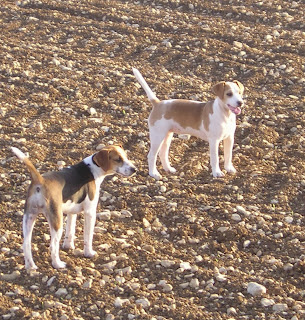 Beagles are possibly one of the oldest breeds with records of the type dating back to pre-Norman Conquest days although they did not look as they do now.  By Elizabethan times they were popular miniature dogs small enough to travel comfortably in a pocket.  As fox-hunting grew in popularity during the 18th and 19th centuries there became a need for a larger hound and all but one variety of Beagle became extinct.  The forerunners of today were preserved by a few enthusiasts for hunting rabbits. By the late 1800's hunting hare with beagles had become established and the breed was secure although the rough-coated ones had died out by the First World War.  The breed was much heavier in those early days with coarser features and they still have a tendency to become overweight if not exercised adequately. 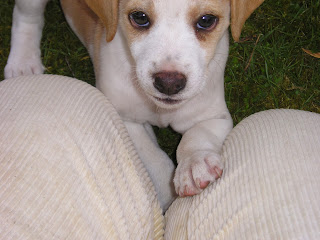 There are now sixty Beagle packs in Britain today.  It is a necessity for hounds when kept in packs to become used to human company and experience a wider environment than they would get in kennels from an early age and so Daring and Darkness came to live with us for a while; a procedure known as 'puppy walking.'  Like all puppies they were into absolutely everything and although Darkness was the less inquisitive of the two neither could be described as shy.  With a hunting dog this forward going has to be encouraged although once when out exercising them they came face to face with a hare - their traditional quarry (now illegal) - they seemed baffled.  It is impossible to see the hare in the photo below but it is within fifteen feet of Daring who didn't live up to his name on this occasion. 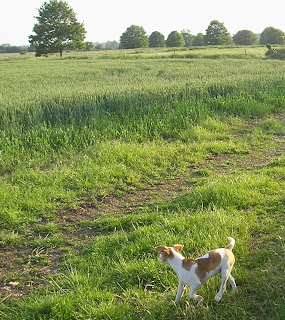 The puppies remained with us for several months until the day came when their hunting instincts began to take over.  Once following a scent, hounds become oblivious to anything else so shouting at them to come to heel has no affect.  It takes nerve to wait for them to return which may be anything up to several hours later.  There is no place for free roaming dogs in sheep country and so it was time for them to be returned to the kennels to join the rest of the pack.  Over the following months we saw them on a number of occasions happy being part of the gang once more. 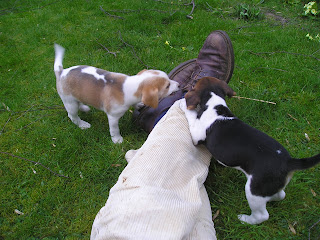 Despite being great fun to have around, I don't feel that they are the best breed to have as pets - although I realise that there are many beagle owners who will disagree with me.  Their tendency to put on weight, their liking the company of other dogs and especially their tendency to howl being my main reasons. 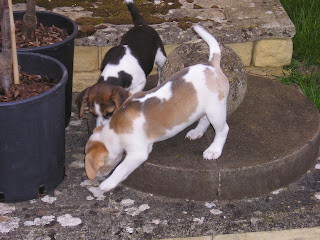 Their stamina and highly developed scenting ability has made them superb hunting dogs and these traits are put to excellent use as search and rescue dogs.  And, of course, they also make first rate and long-lived cartoon dogs - take a bow, Snoopy! 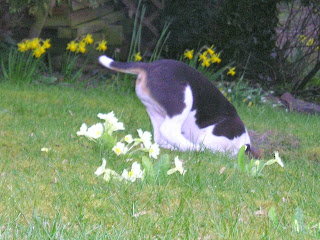