Tibet in the Cotswolds

The Cotswolds are full of surprises; they are around every corner. Often it is a beautiful, old stone building, a dramatic view or a colourful cloudscape.  Occasionally it is something else and at the tiny village of Todenham near Moreton-in-Marsh it is the sight of tall, Tibetan flags fluttering in the breeze. 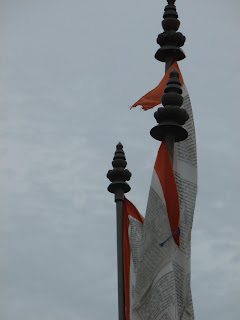 After exploring the Himalayas and Nepal in particular, Alain Rouveure, a Frenchman living in the Cotswolds, felt a real need to help the less privileged families he met there.  Am admiration of their craftsmanship and tribal art led to the creation of the Alain Rouveure Galleries some twenty-five years ago.  Today it is a thriving business whose profits are returned to the country which supplies the clothing, jewellery, gifts and rugs that make the galleries a treasure trove of colour, texture and scents. 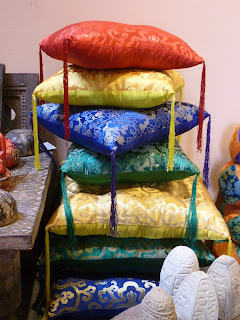 More recently, he has set up the Alain Rouveure Nepal Relief Fund which is funding the building of schools as well as caring for the health of poor children and their families.  A relatively small amount of money goes a very long way: repainting a classroom £45, desks and benches for four students £55.  However, it isn't just these practical issues that funding assists for, as Alain says, just knowing that there are people from far away taking an interest in their remote communities makes a huge difference not just to individuals but also to the whole village. 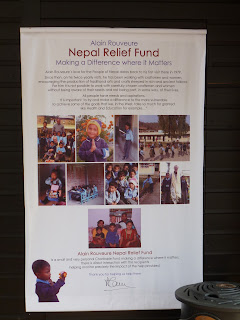 Surrounding the galleries are small but very lovely and tranquil gardens.  The calendula in the photographs were grown from seed given to Alain by Nepalese gardeners at Lumbini, the Buddha's birthplace, and it is interesting to see such a disparity of size and colour all of which help to create a splendid show. 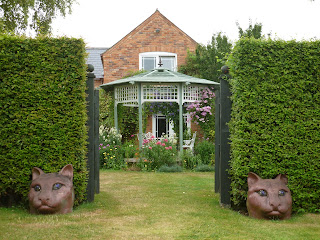 On my visit, I spent a long time trying out the numerous Tibetan singing bowls deciding which sound I liked the best.  It was something I'd always wanted to own but I hadn't realised before then just how much they vary both in their size and their 'ring'.  In the end I realised that it was going to be a bowl choosing me rather than the other way around.  Traditionally, the bowls are used in meditation and prayer and the sound - and the vibration from them - is mesmeric. The YouTube clip is of Tibetan bowls being played alongside Native American flutes.  The method of generating the pulsating 'singing' is shown at about 10:30 into the video. The combination of sounds from two cultures is fascinating and memorable especially when wild birds start to sing in the background.

The visit ended with lunch at the Himalayan coffee house where a very good home grown salad - followed by a 'to die for' cake - was had at very modest cost.  Recently treatment rooms have been added and there are also fund raising concerts - the next to be held is Songs and Arias with the mezzo-soprano, Cerys Jones accompanied by harpist, Tanya Houghton on Saturday 14th September, 7.30pm. For more information about the galleries have a look at their extensive website.