One of the biggest concerns for many people, even experienced gardeners is how and when to prune.  The quicker growing the plant (Wisteria is a good example), or the more spiny it is, the less likely it is to be given the chop - the first is intimidating by size, the latter by pain.

A close relative of that most vicious of shrubs, the Berberis, is Mahonia and the garden cultivars,  Charity and Winter Sun, brighten up many a dark corner with their spikes of yellow, lily-of-the-valley scented flowers on a cold winter's day.  There they grow untroubled by pest or disease becoming ever taller, lankier and ending up just plain, downright ugly.  All of this can be prevented by pruning with the additional bonus of having flower spikes at nose height.

The Mahonia in the photo below has not been left to grow tall but been given a regular clipping with shears to form a ball shaped shrub: this often happens to plants that have to be kept under control resulting in a garden full of 'blobby' shapes.  For a Mahonia that, by nature, wants to be upright, this is an especially hideous way to end up.  The shrub to the fore is Sarcococca, the Winter Box, also clipped to a ball shape, a style that does suit that particular plant although, in my opinion, it is more attractive when allowed to grow naturally. 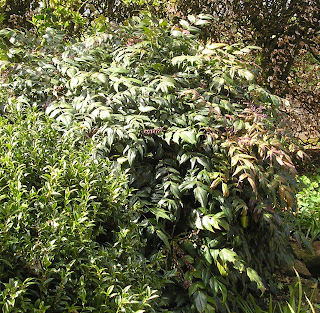 By April, the elongated flowerheads (raceme) will have faded to be replaced by bluish berries.  This is the sign that pruning time has arrived.  Mahonias are very tough, coping with temperatures as low as -20 degrees Centigrade and I have pruned them in frosty weather without loss.  It is always best, however, to do any pruning task when the weather is more clement. 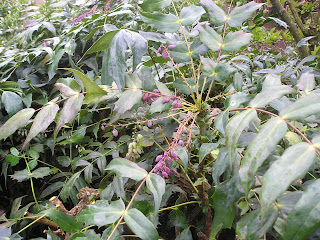 The difficulty with seeing inside a shrub that is growing as densely as this particular Mahonia is easily resolved by simply cutting off a few of the top clusters of leaves anywhere.  Once you can see what you are doing life is much more straightforward and those first random pruning cuts can be rectified later.  In the photo below a branch has been revealed to show how the leaves join the main stem.  The newer growth at the top is a much paler green than the darker, older wood but both have leaves growing from it. 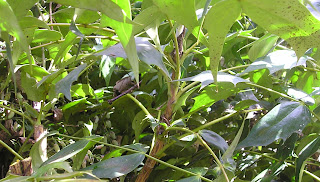 The pruning cut can be made anywhere between the leaves - I tend to be quite drastic and only leave one or two leaves in place.  It can be seen that I have cut this stem hard back into the older, darker wood - new growth will shoot from this point giving flowers again by the following winter. 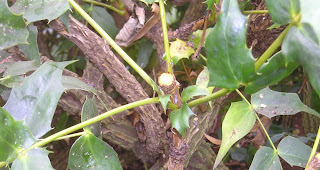 Gradually, the shrub opens up to expose many branches of varying ages.  The older they are the more gnarled and twisted they have become.  Once these are readily visible it is possible to cut some of the oldest growth much harder still: this thins out the plant allowing more light and air to reach its centre.﻿ 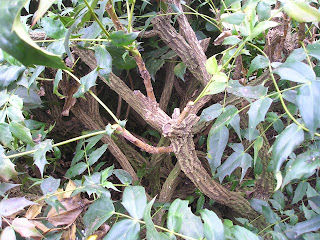 ﻿
Although no growth is visible below the cut, dormant buds will break and create new branches.  Again, these will flower the following winter but, of course, at a much lower height than before. 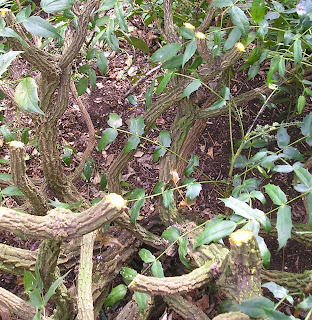 The end result is a shrub that has had much of its centre removed or lowered.  In this particular example, I have left more of the outer growth in place as this gives a more attractive appearance through the summer.  Next Spring this outer growth will be pruned more severely exposing the newer growth inside which can be pruned much more lightly.  By the Spring of 2014 this  mahonia will have been transormed back to its natural shape, a mass of healthy stems, leaves and flowers.﻿ 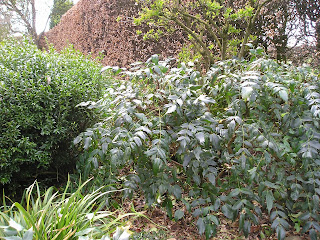 It was only when I returned to the bonfire that I appreciated the beautiful pale jade tones of the underleaf, not normally noticeable.  Another feature of Mahonia is the bright yellow colour of the cut stem - one that it shares with its Berberis cousins and, like them, the root system is also coloured yellow, a useful way of identifying what root system belongs to it when digging in a crowded shrubbery. 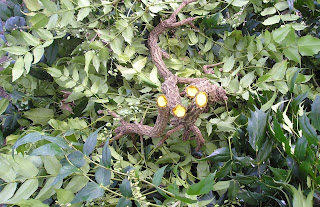 Click on any of the photographs to enlarge them