I have found that there are no shades of grey when appreciation - or lack of it - of Richard Long's art is discussed. It seems that either, like me, you are swept away by it or you just cannot see the point of it at all. Whilst respecting this latter point of view, I ask myself, "Does art have to have a point"? For me, of all art forms , Richard Long's work demonstrates that beauty can be appreciated just for it's own sake.
.
British born (in Bristol, where he still lives and works), Richard Long studied art in both Bristol and London, giving his first solo exhibition in Germany in 1968, as he completed his studies. I imagine this is quite an achievement in itself. Since then he has exhibited regularly throughout the world.
. 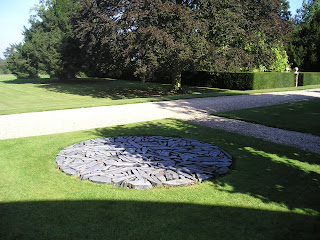 .
In the grounds of my 'reincarnation' house, I was fortunate to be involved in the placing of one of his slate circles (photo above). Sadly, I never met the great man himself, for I would have loved to have sat quietly and watched the stones being laid in place. My contribution was extremely modest: I only removed the turf and put down the base ready for the circle to be put in position. However, this did mean that the circle appeared as if by magic - and it has remained mysterious and magical ever since. And, as if by magic, the gaps between the stones have filled with leaves and debris and yellow lichens have started to colonise their surface.
. 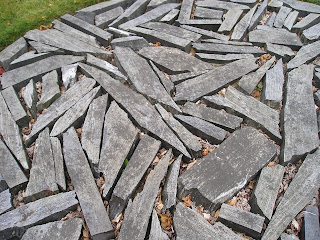 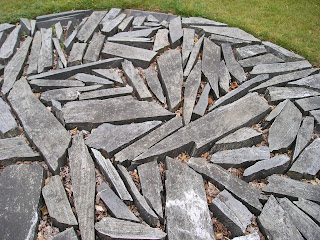 .
Regular readers of this blog will know of my fascination for stone in all its forms, whether it is the earliest standing stones (and we have our own ancient stone circle here in the Cotswolds, the Rollright Stones), the dry stone walls of the secret valley or placing stone in the garden. But Richard Long's stone work is different to all of these for each piece is meticulously shaped and honed - or left in its natural state - and crafted into position. To really appreciate it, you have to become part of the landscape yourself. When you lie on the ground looking across the surface of his work, it takes on a completely new appearance and meaning.
. 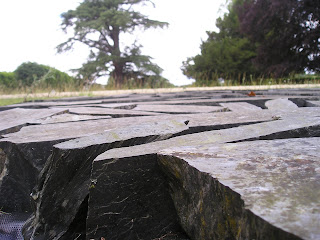 .
When I first came to know and love Richard Long's work, I little dreamt that one day it would inspire me to incorporate land art into one of my own designs. Attached to a beautiful old farmhouse, belonging to a client, is a small, almost bottle shaped, raised area of land surrounded by the remains of a twelfth century moat and mill stream. It is too wild an area in which to create a conventional garden so the plan is to keep it as a simple wild flower area. A very low serpentine turf coverd bank will draw the eye - and, hopefully, the visitor - towards the bottle neck. Careful planting will bring you unwittingly into a living willow tunnel and, at the far end where the land broadens once again, will be a circle. Not a stone circle this time but a meditation circle inspired by the photograph below of children playing. This photograph is from the artist's (or is it sculptor's?) website; all the remaining photo's are mine taken at the reincarnation house. To be redirected there just click and make sure you look at both the Exhibitions and the Sculptures pages.
. 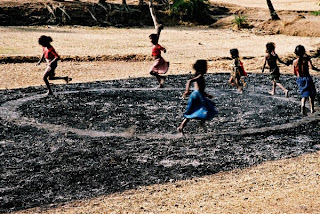 .
As for my new design, work is due to commence at the end of this month and I shall report on progress some time in the future. One thing I am quite certain of is that I will not be asked to hold any exhibitions either in the UK or abroad!
.
.
.